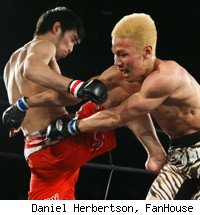 If Shooto's 2010 Rookie Tournament Finals are any indication, Japan has a bright future in MMA as the newcomers put on one of the events of the year at Shinjuku Face in Tokyo on Saturday. The sports oldest promotion crowned champions in six divisions including rookie MVP and Norifumi "Kid" Yamamoto teammate Kyoji Horiguchi.

The pairing of the heavy-hitting Junji "Sarumaru" Ito and Atsushi "ATCH Anarchy" Takeuchi sounds like fireworks and they certainly delivered in what will go down as one of the best fights of the year for Shooto. Takeuchi took the upper hand early with a hook that sent Ito stumbling to the canvas and sent Takeuchi dashing in for the finish. Ito managed to regain his composure for a second, only to again get caught and hurt with another flurry of punches, but this time the Shooting Gym Yokohama striker managed to keep his feet enough to hold steady and throw a hellish right hook that stiffened and fell Takeuchi for the stunning come-from-behind KO.

In the rookie tournament finals: Yuta "Uruka" Sasaki vs, Yo Saito looked like it was going to play out like a replay of the truly devastating Shintaro Ishiwatari-Kazuhiro Ito slam at multiple points, but Sasaki proved more than Ito in this case. Sasaki's constant stream of triangle and armbar attempts entertained and impressed judges as he captured the 65kg (143 lbs.) rookie title with a dominating unanimous decision fought almost entirely off his back.

Kyoji Horiguchi's MVP effort against Seiji Akao left the latter in a bleeding mess, collapsed in his corner and wondering what happened. Akao's constant smiling and even open laughing at times told the story of the first round as he was getting the worst of it in an entertaining, scrappy match. In the second stanza, the grin was immediately wiped of his face with a hook and then torrent of strikes that brought a referee stoppage and gave Horiguchi the 60kg (132 lbs.) title.

Kosuke "Rambo" Suzuki could not have been telegraphing his techniques more clearly as he slowly stalked Yusuke Honma and feigned over and over again with hooks, uppercuts and knees. Honma still didn't see the left hook though that come late in round one that left him needing to be stretchered from the ring. "Rambo" Suzuki seemed to have brought half of the audience himself, but he wasn't embarrassed in front of his fans as he claimed the Shooto 56kg (123.5 lbs.) rookie crown in devastating fashion.

The ever-abnormal Tetsu "Hadairo" Suzuki and Gutsman's Masato Sannai went three rounds in a highly competitive, technical and grappling heavy bout. Sannai's strikes on the feet and aggression regardless of position on the mat was enough to even one judges scorecard but Suzuki's smothering control scored better on two judges cards and so he was awarded the majority decision victory.

Yusaku Inoue took a beating on the feet early against Ryuichiro Sumimura, but somehow managed to rally and score points on the ground despite his swollen face. Remarkable persistence from Inoue paid off as he took the unanimous decision and 76kg (167.5 lbs.) rookie champion title after an extension round.

At 52kg (114.5 lbs.) Masayoshi "Macho The Butterfly" Kato won absolutely no style points with his frilly swimsuit fighting attire, but managed to out-strike Tadaaki "Onibozu" Yamamoto according to two of the judges to take a split decision.