WEC 53 Provides a Fitting End to an Underappreciated Brand 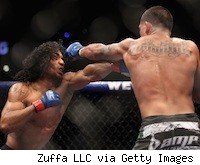 GLENDALE, Ariz. - There must have been some misunderstanding. When the fighters on the WEC 53 fight card were told that Thursday night's event was the last WEC show, perhaps what they heard was that it was the last MMA event ever.

If that were the case it might – just might – explain how the WEC managed to pull off such an unforgettable event.

How unforgettable was it? For one thing, it wasn't until the fifth fight of the night that a bout finally made it out of the first round. Even then, it was a three-round war between Brad Pickett and Ivan Menjivar that drew a standing ovation from the crowd – and that wasn't even the best fight of the night.

That distinction clearly belonged to the night's main event between Ben Henderson and Anthony Pettis. For four rounds they went back and forth, with each man coming close to finishing it at times. If they had just finished out the fifth and final round with more of the same, it would have been remembered as a very good ending to the WEC's final event.

But on a night like this, very good wouldn't have been enough. This needed a great ending, and Pettis provided it. With about a minute left in the fight, Pettis planted his right foot on the fence, propelled himself into the air, and then whipped the same foot across the champion's face, dropping him to the mat.

It was the kind of thing that, if you saw it in an action movie fight scene, you might complain that it was unrealistic, something you could only pull off with wires and pulleys and cooperative stuntmen.

Pettis did it in a title fight. He also did it after he'd already fought for twenty-four minutes. Even though it helped him become the last WEC lightweight champion with a unanimous decision victory over Henderson, he'll almost certainly be remembered more for that one kick than for the hardware it earned him.

As an ending to the WEC's story, it was perfect. For years this was the little organization that could. Smaller fighters, smaller venues, smaller audiences, and smaller paychecks.

And yet, come fight time, it never seemed to matter. The WEC boys delivered some of the best fight nights in all of MMA, and did it on an obscure cable network with a roster of fighters who were consistently putting on twice the show for half the pay.

That's all over now.

After it was announced that the WEC's fighters (some of them, anyway) would be absorbed into the UFC, there was a lot of talk about the need for them to prove that they belonged in the big show.

But after the performance the WEC fighters put on in this final effort, it seems more like it's the UFC fighters who need to prove that they belong in the same cage with the WEC boys.

Thankfully, it's going some place where we can still find it. For a price.