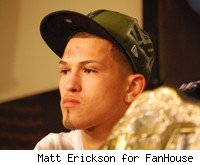 GLENDALE, ARIZ. – The WEC handed out bonus awards for the final time Thursday night at WEC 53 at Jobing.com Arena outside of Phoenix.

Hosting its final event before merging into fellow Zuffa promotion UFC, the WEC gave out its customary $10,000 bonus awards to four fighters following the event. And all four came from the event's preliminary card, which saw five of seven fights end with first-round knockouts or submissions.

Wineland won his second straight Knockout of the Night award and fourth straight overall – but it didn't come without a scary moment inside the cage. After WEC newcomer Ken Stone pulled guard, Wineland was able to pick him up and carry him across the cage to his corner. After a few moments to gather himself and listen to his coaches' instructions, Wineland delivered a power slam, dropping Stone on the back of his head and knocking him out instantly. Wineland landed one shot on the ground before the referee could stop the fight.

Stone was down and motionless on the canvas for several minutes before being taken from the arena on a stretcher. WEC officials confirmed to MMA Fighting that Stone was taken to a local hospital for tests, but that preliminary word was that despite the scary moment, the bantamweight was all right.

Roller rebounded from a loss to Pettis earlier this year and submitted hometown favorite and former lightweight champion Jamie Varner with a first-round rear naked choke. The loss dropped Varner to 0-3-1 since missing nearly a year with injuries suffered defending his title against Donald Cerrone in January 2009.

And the Fight of the Night went to main-event lightweights Henderson and Pettis, who fought a highly competitive five-round title fight that featured a lot of everything – standup exchanges, ground scrambles, reversals, submission attempts from both fighters ... and one of the most inventive kicks in the history of the sport when Pettis catapulted himself off the cage to deliver a kick to Henderson's head deep in the fifth round.