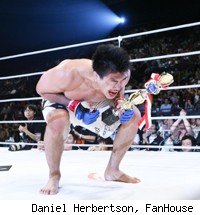 Only days after being KOed by the hands of Singh Jaideep at the K-1 World Grand Prix Finals, Sergei Kharitonov has agreed to fight DREAM light heavyweight GP finalist Tatsuya Mizuno at Dynamite!!, MMA Fighting has learned from sources.

The Dec. 31 bout will be the first MMA fight of the year for Kharitonov. The Russian was once considered one of the top heavyweights in the world but his last mixed martial arts appearance was an unimpressive submission loss to Jeff Monson in April 2009. Kharitonov looked as though he had found some form in K-1, with an impressive win over Takumi Sato in Seoul and a good start against Singh "Heart" Jaideep, but that was put to an end as the Indian found a home for his hands.

Jerome Le Banner was initially slated to face Mizuno but the Frenchman was later offered Beijing judo gold medalist Satoshi Ishii. With sources indicating that the Mizuno-Kharitonov bout has been made, it seems as though Le Banner has opted to take the match with Ishii, although MMA Fighting has been unable to confirm that.