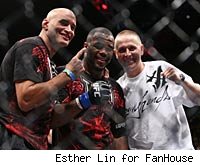 Evans confirmed the booking on Thursday night's edition of MMA Live on ESPN2.

On Wednesday, MMA Fighting confirmed that the expected Abu Dhabi card that would have hosted the event had been scrapped, and the fight would likely be moved to Newark.

Rua has been recovering from surgery to repair a torn anterior cruciate ligament, causing the delay in booking the fight. Rua captured the crown with a first-round knockout over Lyoto Machida at UFC 113.

Evans last competed at UFC 114 in May, defeating Rampage Jackson via unanimous decision.