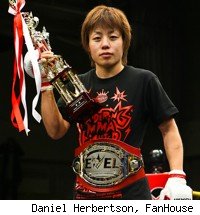 ent Ayaka Hamazaki indicated that she may be following in the footsteps of her mentor as she stood toe-to-toe with one of the best kickboxers in women's MMA in Seo Hee Ham, and battered and bruised Miku Matsumoto's former teammate Sakura Nomura to become the first Jewels lightweight champion at the promotion's end-of-year event on Friday night at Korakuen Hall in Tokyo.

In the finals of "Rough Stone" rookie tournaments, Kikuyo Ishikawa and Hiroko Kitamura edged past their respective opponents to bring home the gold ,but it was 16-year-old Mizuki Inoue that really impressed. The young kickboxer-turned-mixed martial artist dominated and finished a much older opponent for the second time in two outings to win her first MMA title.

Hamazaki was already known as a powerful grappler going into her lightweight queen tournament Finals fight with Seo Hee Ham, but no one was aware of her striking game. Hamazaki's hook from the southpaw stance landed time and time again on the much more experienced kickboxer, and although Ham was landing her own strikes on the feet, Hamazaki's hook was easily keeping the fight even. Going in to the final round, it was impossible to separate the pair and so a last minute, hard-fought throw from a headlock into an armbar attempt was enough to give Hamazaki the win and the Jewels lightweight belt.

A bout between Japan's two best female fighters, Megumi Fujii and Miku Matsumoto, never eventuated and we had to make do with an exhibition bout between the friends, and so when Fujii pupil Ayaka Hamazaki and Matsumoto teammate Sakura Nomura faced off in the semifinals of the lightweight queen GP, we were again reminded of the fight that never was. The grappling-centric fighters were quite even on the mat and so it was Hamazaki's powerful lead right hook, which she seemed to discover during the course of the fight, that gave her the edge with the judges and left Nomura's face swollen.

Her record not being a true indication of her abilities, Seo Hee Ham was seen as an tournament favorite but Mika Nagano's wreslting in the second Lightweight Queen GP semifinal looked to spoil the Korean's night as she took the first round of their bout with her wrestling. Ham rallied in the second round though and started to get more aggressive with her strikes to prevent the wrestling shot. After two rounds the judges moved Ham into the tournament finals due the damage.

Hiroko Yamanaka has been billed as one of Japan's top prospects for the heavier weight divisions outside of Japan, but her win over Molly Helsel displayed that she is still too raw to step up to face the "Cyborg" Santos' of the world. Yamanaka disposed of a game Helsel with unrefined straight punches from the outside but a very close armbar, then triangle in the first round from Helsel, and numerous looping punches through the two rounds indicated that Yamanaka will need more work if she is to truly step up to the international level.

Mongolian Esui got her first win of her career as she blitzed promotional favorite Shizuka Sugiyama with straight punches for a second round corner stoppage after scoring two downs in the first.

Even if we discount her age, Mizuki Inoue proved she is one of the best prospects in female MMA as she easily dismantled her opponent, Asako Saioka in the 56kg Rough Stone Grand Prix Final. Inoue's head movement and powerful strikes from the clinch allowed her to dominate the opening round, but in the second round she really impressed as Inoue slipped a punch, avoided a choke to move into side control, then mount and then apply the flawless armbar.

With the win, Mizuka Inoue improved to 2-0-0 in MMA and captured the Rough Stone GP. At only 16 years of age and with two flawless wins under her belt, Inoue, along with Hamazaki are certainly the breakout fighters of 2010 for Jewels and the future of female MMA in Japan.