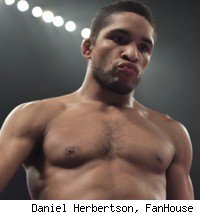 Sengoku's brightest prospect Maximo Blanco will face one of the toughest tests of his young career as he takes on the underrated Won Sik "Parky" Park. Blanco was originally set for a lightweight title fight but as his planned opponent, Kazunori Yokota, was unable to get past Brian Cobb at SRC 15 in October ended those plans. Park has been the victim of unfortunate circumstances over they past year as his debut against Kuniyoshi Hironaka at DREAM 12 in October 2009 was spoiled by an eye poke and his tune-up fight in Deep against Ryuki Ueyama was ruled a no contest after a disputed referee stoppage.