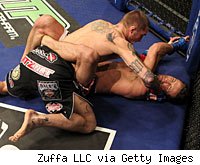 GLENDALE, Ariz. – Eddie Wineland downplayed it, but it would be hard to argue against saying he's experiencing a career transformation.

The Indiana-based fighter, who lives and trains in the shadow of Chicago while holding down a full-time gig as a firefighter is not that far removed from grinding out wins in local promotions just to get back to the WEC. But suddenly, and seemingly under many people's radars, the first bantamweight champion in WEC history is on a four-fight winning streak.

And suddenly, after another convincing win Thursday at WEC 53, the final show in the promotion's history, Wineland finds himself smack dab in the middle of the contender picture at 135 pounds.

Wineland delivered one of the most stunning – and frightening – knockouts of the year Thursday with a textbook slam of Ken Stone, sending his opponent out of the cage on a stretcher and to the hospital. It earned him his second straight Knockout of the Night bonus.

Wineland believes he is close now, but acknowledged at the post-fight press conference that had he been able to take his original fight against Damacio Page last month, a win of that caliber would have him knocking on the door of current champion Dominick Cruz, who defended his title Thursday against Scott Jorgensen.

"That's the ultimate goal – that hardware," Wineland said. "Big congrats to Dominick tonight. He had a great performance, he looked really well and he performed top-notch. But my eye's on the prize, and I think had I not had to pull out of the Damacio fight, that would've pushed me a little bit closer. It's an unfortunate event; it happens."

Though just his boss for one more night, WEC general manager Reed Harris said he likes the improvement he has seen in his original 135-pound champion. Wineland won the belt against Antonio Banuelos at WEC 20 in May 2006. But he lost it to Chase Beebe in his first defense at WEC 26 less than a year later.

"He's been on a good run," Harris said. "That win tonight, that guy he fought tonight was tough. And we'll talk about it Monday. But I think we've got big plans for Mr. Wineland. He's been getting better and better, and every time I watch him he seems to be growing as a fighter. That slam was perfectly executed and he won the fight with it."

Eighteen months ago, it might have been hard to imagine Wineland going on the type of run he's been on. After two fights outside the promotion for Northwest Indiana-based promotions Total Fight Challenge and Corral's Combat Classic, Wineland returned at WEC 40 – and was submitted in less than a minute by Rani Yahya.

But he won back-to-back unanimous decisions over former top contender Manny Tapia and former lightweight UFC fighter George Roop, sweeping the judges' scorecards each time. And his last two wins have come with Knockout of the Night prizes attached to them, giving him four straight dominating performances.

Though he trained sporadically with fellow former bantamweight champ and fellow Northwest Indiana-based fighter Miguel Torres, Wineland said a camp change has helped him get to the point he's at now.

"I was training with Miguel for a while, and I needed to branch out from there and went back to my roots, training with Duneland Vale Tudo and Mark Vives at New Breed (Jiu-Jitsu in Chicago)," Wineland said. "Just working on my composure – staying patient, staying calm and not trying to take peoples' heads off right away, really picking my shots and making them count."

That composure is what he gives credit to for the slam of Stone that knocked him out instantly and sent him to the hospital. When Stone jumped guard and tried to sink in a guillotine, Wineland calmly walked him to his corner to listen to instructions from his coaches – thinking vintage Rampage Jackson in Pride all the while.

"I carried him to my corner and all I saw was Rampage in my eyes," Wineland said. "He was going for the guillotine and my corner was yelling at me to frame away on his face. So I framed away on his face and I was grabbing behind him so that he couldn't jump off. Either way, whether he held on or jumped off, he was getting slammed. I was going to slam him one way or the other."

Wineland said he plans to just win one fight at a time – while still maintaining his full-time firefighter job – and if he just keeps winning, sooner or later, his time will come again.

"As long as I keep winning and keep doing what I'm doing, they can't really deny me the push."