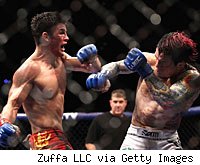 GLENDALE, Ariz. – Now that he's the UFC bantamweight champion, Dominick Cruz seems to already be settling into Company Man status – but he hopes a lingering hand injury can get fixed sooner rather than later.

After dominating Scott Jorgensen for a five-round unanimous decision on Thursday at the finale WEC event, WEC 53 at Jobing.com Arena outside Phoenix, Cruz (17-1, 7-1 WEC) said he'll know next week whether or not surgery on his hand will happen right away, putting him out for several months, or if it will be delayed.

"I work for the UFC now, and I pretty much do what I'm told," Cruz said at Thursday's post-fight press conference. "But at the same time, I've been going into these last two fights with a hand injury that needs to be addressed so that I can continue to fight at the level that I'm fighting – because it's something that's just going to get worse if I don't get it taken care of."

Cruz upset Brian Bowles at WEC 47 in March to win the bantamweight title. He defended the belt with a split decision win over Joseph Benavidez at WEC 50 in August.

But the 135-pound champion, who retired the WEC belt and got a new UFC belt after beating Jorgensen, said there is one thing he'd put off surgery for: the chance to coach against Urijah Faber on "The Ultimate Fighter."

Many of the cards seem to line up for that possibility. UFC president Dana White has not yet announced the coaches for Season 13 of the Spike reality competition, which will feature welterweights and middleweights and is scheduled to begin taping in January. But White said he anticipated being able to make a decision on the coaches Friday – the day after the Cruz-Jorgensen fight. Cruz's only career loss came at the hands of Faber, the former WEC featherweight champ who has now dropped down to bantamweight. And Cruz made sure to say he'd love to avenge his only loss. The opposing coaches on TUF traditionally fight at the conclusion of the show.

"I would accept (a coaching position) very much, and I would be stoked," Cruz said. "And it would be awesome, because I could get my loss back. An opportunity like that, I might have to deal with the hand again."

Ultimately, though, Cruz said he's trying to think about his long-term health, even though the lure of a TUF coaching gig against Faber would be enough to throw that out the window for a few months.

"I'll get my hand checked out and take it stride by stride – I'll talk to my camp, my coaches. They want what's best for me, and I want what's best for the longevity of my career," Cruz said. "This is just something that needs to get taken care of, and I've known it because it's been bothering me. But everybody goes into fights with injuries. It's just something that's part of the sport. I've been blessed and been able to tolerate it."