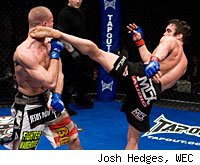 GLENDALE, Ariz. -- This is the WEC 53 live blog for all the preliminary bouts in support of tonight's WEC on Versus card at the Jobing.com Arena.

Round 1: A right hand to the gut from Varner right off the bat backs Roller up and leaves him with a face that suggests he might feel like throwing up right now. Varner darts in behind his jab, looking like the quicker fighter so far. They exchange and Varner looks to have been poked in the eye, but Herb Dean lets it go on. Varner follows up a good leg kick with a high kick that's mostly blocked. His right eye is bloodied, possibly from a poke, but it's hard to tell. Varner drops Roller briefly with a left hook, but he's back up fast and snags a takedown, moving quickly to Varner's back in a standing position. Varner fights off the choke and then dives onto the mat with Varner still on his back, catching Roller's head between his shoulder and the mat. Roller hangs on and locks up the choke. Varner can't fend it off and he's forced to tap.

Round 1: They waste no time exchanging punches in the middle of the cage, with Picket ducking low and Menjivar keeping his head up high as he throws. Menjivar tries a spinning backfist, but Pickett drops underneath it for an easy takedown. They work back to their feet quickly and Menjivar works some elbows in the clinch. They separate and Pickett lands a solid left hook to the body. Menjivar answers with a knee to the head. Picket gets a takedown, briefly, but can't do much with it before Menjivar gets up. The striking pace has really picked up, with each guy giving and getting his share. Menjivar appears to have a cut near his left eye. He keeps trying for the spinning backfist, and again it results in him being taken down. Pickett ends the round on top of Menjivar, working some ground and pound out of his guard. MMA Fighting scores the round 10-9 for Pickett.

Round 2: An accidental kick to the groin from Pickett starts off the second, but Menjivar gamely shakes it off. From the corner, Greg Jackson implores Menjivar to use his jab, which he begins to do with increasing frequency. They trade left-right combos with each man landing well. Menjivar tries another spinning backfist, missing yet again. A punch and a knee from Menjivar has Pickett wobbled. Menjivar smells blood and starts to pour it on, landing several hard rights and a solid knee to the head. Pickett is on wobbly legs, but he hangs tough and gets a takedown. Pickett goes to work with ground and pound and takes Menjivar's back before transitioning to an armbar. Menjivar escapes and the crowd seems relieved that this intense fight will go on a little longer. The pace slows in the final minute as they work from the clinch, and at the horn both men stagger to their respective corners. MMA Fighting scores the round 10-9 for Menjivar.

Round 3: They exchange a high-five and hug to start the final round, and the crowd rewards their efforts up to this point with a loud ovation. Both men seem to be tiring, but Pickett tries for a takedown only to nearly get caught in a guillotine. He escapes and goes back to throwing two-punch combos in the center of the cage. Pickett ducks under a jab and lands a stinging left hook, followed a few seconds later by a right hand that drops Menjivar to a knee briefly. Menjivar spins as if to throw another backfist, but only eats a left hand for his trouble. A jumping knee from Pickett counters a Menjivar takedown attempt. Menjivar regains his bearings and pounds Picket with a left-right combo and then a kick to the body. They exchange left hooks at the final horn and the crowd is on its feet. An excellent showing from both men. MMA Fighting scores the round 10-9 for Pickett.

Round 1: Stone goes to work with leg kicks early, but Wineland is stalking him around the cage, undeterred. Stone comes forward with a two-punch combo and gets his head snapped back by a right from Wineland. Stone shoots but Wineland stuffs it easily. Stone jumps into the guard and wraps his arm around Wineland's head for a guillotine, but Wineland calmly walks over and props Stone against the fence. Stone removes the guillotine and Wineland immediately brings him down for a huge slam. Stone's head bounces off the mat and he's out cold. Wineland, who made his entrance to Hulk Hogan's theme music, runs around the cage doing his best Hulkster impression in celebration. It's not half-bad.

Danny Castillo vs. Will Kerr

Round 1: Kerr jumps onto Castillo and latches on a guillotine almost immediately. He pulls guard but can't finish it. Castillo slips out and Kerr rolls for a kneebar, then transitions into a heel hook. Castillo stays calm and defends, attacking Kerr's hands and moving into a position to strike. Castillo opens up with right hands to the body, mixing in some shots to the head. A hard right catches Kerr as his head is flat against the mat. He doesn't move to defend and Castillo keeps the rights coming. Kerr is out and Herb Dean pulls Castillo off. Brutal knockout victory for "Last Call."

Round 1: Alcantara goes on the attack early, backing Lamas up with a front kick to the body and then clinching after an unsuccessful takedown attempt. Lamas frees himself and gets back to the center of the cage, but he seems to be waiting for Alcantara to go first so he can counter. Alcantara comes forward with another flurry, and they clinch against the fence. They work back to the center after a minute or so of inactivity, and Alcantara unleashes a vicious left hook that catches Lamas squarely on the chin. Lamas goes down in a heap against the fence. Alcantara adds a couple extra shots before referee Ron Mation can jump in and stop it, but it was essentially over as soon as that left hand landed.

Yuri Alcantara def. Ricardo Lamas via TKO (punches) at 3:23 of round 1.

Round 1: Barao whiffs on a headkick to start us off, then tries several more in the next 30 seconds. One connects, though mostly blocked by Cariaso. A follow up leg kick just as Cariaso attempts a kick of his own puts Cariaso on his back. Cariaso tries to work for an armbar, but Barao avoids it and eventually passes to side control. Cariaso gets caught in a kimura as he tries to escape. He defends well, but gives up his back to Barao. Barao looks for a rear naked choke but Cariaso defends, giving up the mount only to turn and give his back again with a little encouragement from Barao's punches. Barao looks for the rear naked again and this time it's in. Cariaso fights to control one of Barao's hands, but can't hold it. The choke is on and Cariaso is forced to tap.