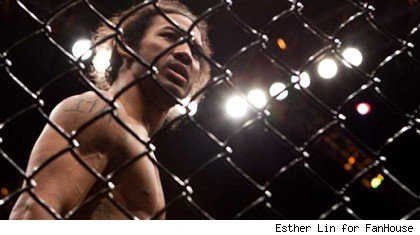 World Extreme Cagefighting puts on its 53rd and final fight card Thursday night, and we'll say goodbye with what should be a very entertaining fight card, with one bout determining the first UFC bantamweight champion, and another determining the next UFC No. 1 contender.

What: WEC 53: Henderson vs. Pettis

Ben Henderson vs. Anthony Pettis
This fight is for the final WEC lightweight title, but more significantly it's for No. 1 lightweight contender status in the UFC. I'm not sure that either Henderson or Pettis is really ready for either UFC lightweight champion Frankie Edgar or Gray Maynard, but on its own merits this should be a very exciting fight between two of the most likable and entertaining young lightweights in the sport. Pettis has had three great finishes in his last three fights, but in this one I'm picking Henderson to control Pettis on the ground and either win a five-round decision or make Pettis tap.
Pick: Henderson

Dominick Cruz vs. Scott Jorgensen
Cruz enters the fight as the WEC bantamweight champion and can leave this fight as the first UFC bantamweight champion. Jorgensen has a propensity for putting on exciting barnburners, while Cruz is the more cautious fighter, and I expect Cruz to dictate the pace of this fight. Cruz has a height and reach advantage over Jorgensen and should be able to use that to keep Jorgensen at bay and win a fairly one-sided decision.
Pick: Cruz

Donald Cerrone vs. Chris Horodecki
Cerrone has been one of the best, most exciting and most recognized lightweights in the WEC, while the 23-year-old Horodecki has spent the last few years building up a reputation as one of the best prospects in the sport. I'm not sure that either one of these guys has what it takes to compete in the shark tank that is the UFC's lightweight division, but by WEC standards it's a very intriguing lightweight fight, and one that I think Horodecki will win by decision, thanks to his superior striking.
Pick: Horodecki

Bart Palaszewski vs. Kamal Shalorus
Palaszewski is on a four-fight winning streak and has looked very good in finishing his last two opponents, but Shalorus is a great wrestler, and I like him to take Palaszewski down and completely control him on the ground, winning all three rounds of an easy decision.
Pick: Shalorus

Zhang Tie Quan vs. Danny Downes
Of all the fighters moving from the WEC into the UFC when the merger becomes official, Zhang may have the greatest potential for having an impact on the UFC's bottom line. Not because he's one of the WEC's best fighters (he's not) but because he'll become the first UFC fighter hailing from China, and the UFC would love to break into the Chinese market. I expect Zhang to submit Downes and head into the UFC with a 2-0 WEC record.
Pick: Zhang