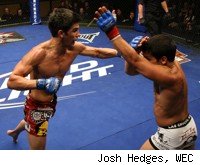 GLENDALE, Ariz. -- This is the WEC 53 live blog for Dominick Cruz vs. Scott Jorgensen, a bantamweight title bout on tonight's WEC on Versus event from the Jobing.com Arena.

Cruz defends his bantamweight title for the last time. The winner of this fight will also become the first UFC bantamweight champion.

Round 1: Cruz dances his way to the center of the cage, peppering Jorgensen with right hands to the head and body. Jorgensen is trying to track Cruz down, but not having much success. Cruz continues picking away at Jorgensen with right hands one at a time. Jorgensen's corner shots for him to take Cruz down, but as he moves in low Cruz clips him with a hard knee. Jorgensen stays after him and gets Cruz down, but can't keep him there. Jorgensen charges forward but Cruz avoids him and then opens up with a combo and finishes with a leg kick. The champion's speed advantage is plainly apparent early on in the fight. Jorgensen finally manages to pin Cruz against the fence in a clinch in the final minute, briefly halting Cruz's frantic movement. They go back to the center and Jorgensen gets a takedown in the closing seconds, trying to move to Cruz's back but giving up top position before the horn sounds. MMA Fighting scores it 10-9 for Cruz.

Round 2: They trade simultaneous leg kicks and Jorgensen almost goes down. Cruz is sporting a bloodied nose, though it may be from a cut on the bridge of his nose. Cruz continues popping Jorgensen's head back with quick right hands even as Jorgensen's corner implores him to "take the fight to" Cruz. Cruz gets a takedown now and goes to work out of Jorgensen's guard. Cruz works the challenger against the fence and works short right hands to the body. Jorgensen works his way back up and lands a good head kick in the final minute, but it's hardly slowing Cruz down. Jorgensen's right eye looks severely swollen as the round ends. MMA Fighting scores it 10-9 for Cruz.

Round 3: Cruz darts in with a right hand to start the round, landing cleanly again. He dances around Jorgensen and catches him leaning into another right that clips his jaw and drops him to the mat. Jorgensen gets back up and goes back on the hunt, but Cruz is still proving to be a difficult target. Jorgensen catches Cruz leaning into head kick, but he can't seem to get enough on it. Cruz is sticking and moving his way all around Jorgensen at the moment. Cruz dashes in with a takedown and lands in Jorgensen's guard. He tries to go to work from the top, but Jorgensen pulls off a nice sweep and goes from bottom to top. Cruz scrambles up in a hurry before the round ends, and Jorgensen lets the opportunity slip away. MMA Fighting scores the round 10-9 for Jorgensen.

Round 4: Cruz starts the round with a sharp right hand that lands. Jorgensen tries to follow him around for some payback but only gets his head popped back with a left hand. Cruz tries for another takedown and gets it easily before moving Jorgensen up against the fence and working short right hands to his head. They get back to their feet and Jorgensen is starting to look a tad weary. Jorgensen's takedown attempts are getting less and less effective, and he lacks the speed to match Cruz in the striking game. Cruz slaps a kick into Jorgensen's body to sap some more energy out of him. A takedown from Cruz in the final ten seconds brings another one-sided round to a close. MMA Fighting scores the round 10-9 Cruz.

Round 5: Cruz is putting his punches and kicks together more to start this round. All Jorgensen can do is keep walking into them. In Jorgensen's corner Joe Warren encourages him to "swing for the fences." The trouble is that Cruz has been just out of his range all night long. Jorgensen finally manages a body lock and uses it to get a takedown, but he can't keep Cruz down. Cruz returns the favor a few moments later, only he has no such trouble keeping Jorgensen on his back. Jorgensen gets to his feet in the final 20 seconds, but he can't seem to get to Cruz, who is dancing in and out and flicking out right hands until the final horn. MMA Fighting scores the round 10-9 for Cruz.