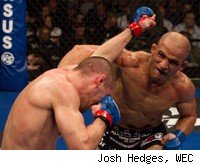 GLENDALE, Ariz. -- This is the WEC 53 live blog for Bart Palaszewski vs. Kamal Shalorus, a lightweight bout on tonight's WEC on Versus event from the Jobing.com Arena.

Round 1: Shalorus backs Palaszewski up against the fence and unleashes a stiff left-right combo that gives 'Bartimus' something to think about. After another left Shalorus gets Palaszewski down relatively easily and then goes to work battering his body with right hands from the top. Palaszewski tries for an armbar but Shalorus is out easily and pounding Palaszewski's head with rights. Palaszewski is covering up, but those blows are getting through and thumping off his skull. Palaszewski seems content to take it for now, and Shalorus has no problem giving it. After being warned several times for grabbing the fence, Palaszewski manages to get back to his feet, eating another right hand for his trouble. The finish the round trading leg kicks, with Shalorus getting the better of it. MMA Fighting scores the round 10-9 for Shalorus.

Round 2: Shalorus goes right back to work with leg kicks to start the second. Palaszewski looks for a head kick and then a kick to the body, but can't do much with either. Shalorus lands another leg kick and Palaszewski responds with a head kick that very nearly creates serious problems for Shalorus. Shalorus' corner is imploring him to go for a takedown, but he doesn't seem terribly interested in it. Palaszewski continues looking for the head kick, with increasing success. Shalorus finally grabs a single-leg and puts Palaszewski on his back, but Palaszewski quickly ties up his arm in the guard. Palaszewski scrambles to his feet and endures a quick flurry from Shalorus. Palaszewski tries to come on in the final seconds, but can't get anything started. MMA Fighting scores the round 10-10.

Round 3: Shalorus comes forward with a right hand and left hook that lands flush, backing Palaszewski up. Shalorus thinks about a single-leg, but quickly abandons the idea, only to get a double-leg a few seconds later. Palaszewski scrambles up without suffering any damage. Shalorus seems to be getting a little sloppy with his strikes as he tires. Palaszewski lands a straight to the body and a hook to the head. Shalorus shoots for a takedown and Palaszewski tries a guillotine, but can't hold on to it as he gets put on his back again. Shalorus is grinding away at Palaszewski, trying to pass. Palaszewski gets to his feet and lands a punch-kick combo that stings Shalorus. A couple knees to the head from Palaszewski and Shalorus is looking a little wobby. There's less than minute left, and Shalorus seems content just to survive the round, which he does. MMA Fighting scores it 10-9 Palaszewski.