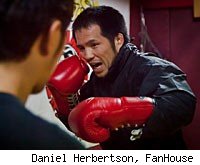 K-1 and DREAM promoter Fighting and Entertainment Group and Sengoku promoter World Victory Road continue to build towards Dyanmite!! and Soul of Fight this week as a host of bouts have been added to the end-of-year events

UFC veteran and DREAM welterweight GP finalist Jason High this week announced via Twitter that he will be facing former pound-for-pound great Hayato "Mach" Sakurai under the Dynamite!! banner. High had his only fight in the UFC against Charlie Brenneman back at UFC Fight Night 21 but after dropping a decision was cut from the Zuffa roster. Sakurai is currently on a three-fight slide and has been lacking motivation over the past year as he talks more and more of retirement.

K-1 legend Jerome Le Banner had agreed to fight DREAM light heavyweight GP finalist Tasuya Mizuno, but has now been offered a fight with Beijing Judo gold medalist Satoshi Ishii. Le Banner's management is currently considering which opponent to choose but have been advised by French media to choose Ishii and will likely go down that route.

FEG President Sadaharu Tanigawa will be announcing five fights this Friday, among which will likely include the Sakurai vs. High bout as well as Jerome Le Banner versus his elected opponent.