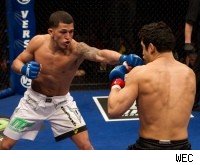 Anthony Pettis brought the WEC promotion to an end in style on Thursday night, using one of the most incredible kicks in the history of the sport to seal the victory against Ben Henderson at WEC 53.

The kick all but defies description: Pettis jumped into the air, pushed off the fence with his foot and landed an incredible head kick at the end of the fifth round, putting an emphatic ending on his unanimous decision victory. The kick looked like something out of a martial arts movie, but Pettis said it's something he and his coach have been working on.

"Duke Roufus, we practice that all the time," Pettis said. "I've got 10 more of those kicks coming when I'm in the UFC. How do you like that to end the WEC?"


The fight started well for Henderson, who backed Pettis up to the cage with a great combination in the first round, then held Pettis against the cage and eventually took him down. It looked like Henderson would dominate the round from there, but Pettis attempted an arm bar from the bottom, and when Henderson pulled free, it gave Pettis an opening to get back to his feet, where he started to look more comfortable and began to land some strikes late in the round.

In the second round, Pettis went on the attack, hurting Henderson with a leg kick and a punch standing up and then threatening him on the ground. Once Henderson recovered it was a lot of back-and-forth without much damage being done.

The third round was a strange one: Pettis shot in for an early takedown and then got Henderson's back on the ground, and he then proceeded to spend most of the third round on Henderson's back, with Henderson standing up. Pettis was never able to come close to sinking in the rear-naked choke that he wanted, but he definitely had to win the third round based solely on the positional advantage he held throughout.

In the fourth there was a wild scramble on the ground that ended up with Henderson having Pettis's back and attempting a rear-naked choke, and it appeared that Henderson almost had Pettis ready to tap. But Pettis, amazingly, managed to escape and actually get Henderson's back before getting back to his feet. It was a close, exciting round that ended back on the ground with Pettis attempting a guillotine, and through four rounds I had the fight even, with the winner of the fifth winning the fight.
I've got 10 more of those kicks coming when I'm in the UFC.
-- Anthony Pettis
Early in the fifth Pettis hit Henderson with an accidental kick to the groin, which took a little wind out of Henderson's sails, and he also hurt Henderson with a punch to the head. Henderson briefly got the advantage on the ground, however, and with just a minute to go it still looked like anyone's fight.

Now Pettis becomes the No. 1 contender in the UFC and will take on the winner of the January 1 fight between Frankie Edgar and Gray Maynard. Before Thursday night, some questioned whether Pettis really belonged in that kind of a fight. Pettis erased those doubts, with one of the great highlights of MMA history.