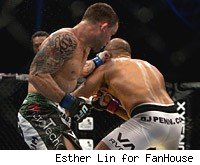 An expected March 2011 return trip to Abu Dhabi in the United Arab Emirates has been scrapped by the UFC, a source from the company confirmed to MMA Fighting.

The UFC had initially planned to host an event there in the first quarter of 2011, but last week, company president Dana White admitted it was no lock.

Now, the UAE trip is off the radar for the time being, although the source said the company will examine a return there later in the year.

The UFC made its maiden voyage there on April 10, 2010, seeing Frankie Edgar capture the lightweight title in an upset over BJ Penn, while Anderson Silva retained his middleweight crown with a decision over Demian Maia.

The region is known for its hot climate, and temperatures can climb as high as 120 degrees Fahrenheit in the summer. Because the city has outdoor-only arenas, the timing of athletic events requires extra consideration.

Abu Dhabi became a target destination for the UFC just recently. In early January 2010, the UFC announced that Flash Entertainment, a subsidiary of the government of the Emirate of Abu Dhabi, had purchased a 10 percent stage in Zuffa, the UFC's parent company.

It is expected that the March 19 date targeted for Abu Dhabi will be moved to the Prudential Center in Newark, New Jersey. That event should hold the UFC light-heavyweight title match between Rashad Evans and Mauricio "Shogun" Rua.