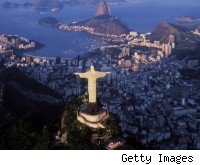 Marking a return to the country that helped create modern mixed martial arts as we know it, the UFC on Wednesday announced that the promotion would stage a show at HSBC Arena in Rio de Janeiro, Brazil on Aug. 27, 2011.

Given the economic potential for both the promotion and potential host cities, White said the UFC's move into the country was more than a one-time visit.

The return is a long time coming.

The last UFC event held in Brazil was on Oct. 16, 1998. On that night, Frank Shamrock held on to the middleweight championship, while other fighters participating included Vitor Belfort, Pedro Rizzo, Wanderlei Silva and Pat Miletich.

"Ten years [after buying the company], here we are today answering the one question over the last 10 years I've been asked the most: when are you going to be doing a fight in Brazil?" Fertitta said. "We look forward to helping to grow the sport in Brazil and making a significant economic impact on the city of Rio."

"That's a lot of gold up here," White joked, before pointing out that several men in the argument for the world's top 10 pound-for-pound fighters are Brazilian.

"It goes to show how much talent and quality of talent are in Brazil," White said.

Also included in the announcement was MMA legend Royce Gracie. Brazil's Gracie family is largely considered the first family of MMA, helping to create the inaugural UFC event as a way to market Gracie jiu-jitsu in the United States.

Rorion Gracie, the son of Helio Gracie, co-founded the tournament with Bob Meyrowitz and Art Davie. At the time of the November 1993 show, it wasn't known if it would be a one-shot deal or continue into the future, but today, the UFC is valued at over $1 billion.

The UFC's move into Brazil comes as the South American nation continues a gradual move on to the world stage. Brazil recently won the rights to the 2014 Soccer World Cup, as well as the 2016 Olympic Games.

According to several news reports, Brazil's economic growth is second only to China worldwide, and last Sunday's "60 Minutes" reported that the country is poised to overtake France and Britain as the world's fifth-largest economy.

White faced questions about which UFC fighters would be competing in the promotion's return, but he noted too many fights had to play out in the interim to predict such a thing.

"I'm sure there are a lot of Brazilians that will want to fight on this card in Rio," he said with a smile.

White didn't close out the press conference without adding one more nugget that will draw plenty of speculation, as he and Fertitta said they would have "one more surprise announcement later this year" in regards to another location the UFC will soon be visiting for the first time.