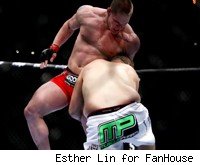 Todd Duffee and Drew McFedries' first fights back to the smaller leagues following UFC runs will be at Titan FC 16 on Jan. 28 in Kansas City.

Duffee is set to face TUF 10's Abe Wagner in the main event, while McFedries will take on Gary Tapasua in another televised bout on the card, which will air live on HDNet at 10:00 p.m. ET.

Ever since his release from the UFC in September, the big question was where Duffee (6-1) would end up. Duffee, best known for holding the fastest UFC knockout at seven seconds, remains a prospect despite a recent loss to Mike Russow at UFC 114.

Wagner (6-3) appeared on The Ultimate Fighter television show but was passed up by the UFC after the show. His most recent fight was in February in a KO loss to UFC veteran Travis Browne.

McFedries (8-6), a fan favorite in the UFC for his knockout-chasing style, last fought at UFC 103 in a submission loss to Tomasz Drwal in September 2009. McFedries was 4-5 in the UFC with four (T)KO victories, but also four submission losses.

Tapasua (6-1), who fights out of the Kansas City area, is a one-time Strikeforce Challengers competitor.