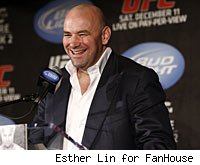 In the week and a half since the Finale of The Ultimate Fighter Season 12, speculation has run rampant about who the coaches will be for the show's 13th season, which will begin taping in early 2011. UFC President Dana White said on Wednesday that he's about 48 hours away from knowing the coaches' identities.

"We should have it done by Friday," White said at a press conference in Rio de Janeiro, where he announced that the UFC would host a fight card in Brazil in August.

So who are the likely choices?

Despite some talk that Wanderlei Silva and Chael Sonnen would be next season's coaches, White said that won't happen. There's also been talk that Brock Lesnar and Frank Mir could be the coaches, but it would be awfully tough for the UFC to get the reclusive Lesnar on board for that.

White also said that just because he expects to know the coaches on Friday, that doesn't mean fans will know that soon.

"We won't announce it for a while anyway," White said.

"We want to take The Ultimate Fighter everywhere," White said. "It obviously makes sense in Brazil. Imagine the talent that would come out of that show. It would be incredible, so yeah, we want to do it. . . . I don't know how fast we could get it done but we'll do it as soon as possible."