Chris Horodecki Hopes to Close Out WEC Career 'With a Bang' 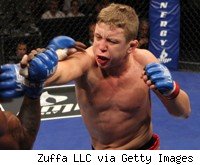 Canadian lightweight Chris Horodecki is set to take a step up in competition this Thursday when he faces three-time WEC title challenger Donald Cerrone at WEC 53 in Glendale, Ariz.

For the 23-year-old out of London, Ontario, a win over Cerrone would almost certainly guarantee himself a UFC roster spot alongside close friends, training and business partners Mark Hominick and Sam Stout.

In an exclusive interview below, Horodecki talks about fighting Cerrone on the last-ever WEC card, "fighter years," the UFC's announcement to run a show in Toronto and much more.

Ray Hui: You'll be fighting Donald Cerrone, one of the favorites within the WEC realm. How important is this opportunity?

Chris Horodecki: It's a huge fight for me. Donald's a big name. He's one of the most well known guys in the WEC and especially fighting on the last WEC show, it's historic and I want to go out with a bang and have this fight live up to its expectations which I know it will. It's just another step to show that I'm for real and that I'm making myself a contender.

RH: This fight was signed prior to the announcement of the UFC-WEC merger. Have the stakes of this fight changed upon hearing of the news?

RH: Even though you've only been in the WEC for a little over a year, how would you describe the feeling you'll get when you step inside the blue cage for the last time?

CH: Like you said, it will be my fourth fight there, and I was getting really comfortable being there, but it's the exact same people running the show as the UFC. And people got to remember that. The same people backstage, same interviewers, writers working the show. Bruce Buffer has been on the mic the last few times. So it's not going to be that big of a transition. It's really good for the fighters because now we're going into the UFC. The general public's perception is that the WEC and the UFC aren't the same and I think it's going to allow a little more credibility to the WEC fighters, knowing that they are one equal with the UFC.

RH: On the other hand, while the WEC is seen as a lesser of the UFC, the general perception of the WEC is that it's more exciting. What is it about the WEC that makes it produce consistently entertaining programs?

CH: I just think the lighter weights. The speed factor, the endurance factor that the lighter weights carry and along with the fact that the talent pool everyone is hungry, everyone wants to fight, everyone wants to stay active and everyone is hunting for the belt. Very rarely do you see a dominant champion for a really long time. The belts have been changing a lot and it just shows how hungry the contenders are.

RH: How much of that general belief will change when the WEC is fully incorporated into the UFC's roster?

CH: Already what you're seeing in the UFC with the lightweights, you're going to see that more now with the featherweights and bantamweights. It's just great news for the fans more than anybody. -- And for the fighters. Like I said getting that recognition is huge and we're a part of the biggest show in the world.

RH: The merger will change the landscape of the division for the WEC lightweights. Not only with the increase in competition, but also, there's going to quite a few physically larger lightweights in the UFC. Gleison Tibau is one example. Will you be considering a drop in weight after this fight?

CH: No, not right now. I feel really comfortable at 55. I think 45 would be a really long way to go. Just right now I feel really good and I've been fighting at this weight for my whole career ... There's pros and cons. There's always a debate, if you cut more weight [you'll be less strong], or if you're a bigger fighter you're not going have as much endurance. You got to find your happy medium where you're feeling good and you're performing.

RH: Cerrone has never been knocked out before. As someone with nearly half his wins via (T)KO, is that a streak of Cerrone's you want to end, especially?

RH: You're only 23, but at the same time, you've had 18 professional MMA fights. What are your thoughts on "fighter years"? Do you think someone who started fighting at an early age will also be more likely to retire earlier than the average fighter we see nowadays?

CH: I'm not at that time yet to be thinking about retiring or what not. Yeah, I'm young, but I'm a fan of the sport. I've been a fan for a long time and it's all going to depend on how I feel and how my body is reacting -- a lot of the fighters you're seeing, Randy Couture, Chuck Liddell, the guys that were fighting into their 40s, they weren't competing mixed martial arts into their late 30s. You know what I mean? So that's the difference. We're going to see the next few years, the younger generation come up. You're not going to be seeing so many people fighting into their 40s because they would've already accomplished or done what they wanted to do a lot sooner before that. Also at the same token, fighters are competitors, they don't want to go away. That's the thing. It's different for everybody and I just want to be involved in the sport as long as my body can allow.

RH: The UFC recently announced they'll be finally running a show in Toronto. As someone who was born and raised in Ontario, does that make you proud to see how far the sport has come?

CH: It's huge, man. I'm so excited. it's taken a long time. A long time. It's been almost 10 years that people have been lobbying and trying to get the government to listen and to open their ears. OK, It's the greatest sport in the world, let's bring it home, let's bring it here, and now we know that Ontario produces talent, we know that they're are strong fighters coming out of Ontario. It's a long time coming and it's finally going to be for us [fighters], right in our backyard. One of the best things for the fighters -- we've been the away team so many times, to be the home team it's going to be such a satisfying experience for us.