Stefan Struve Wants to Get to 280 Pounds for Lesnar, Carwin, Etc. 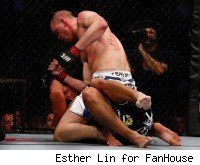 With his first-round win at UFC 124, Stefan Struve has now captured five of his last six fights, a strong run in the division. Because of it, many believe Struve is soon to face up with some of the division's best. On the flip side, Struve is just 22 years old, so it might make some sense to let him continue to work his way towards the division's elites.

Because of a variety of issues, the UFC may well put Struve into the mix with the biggest of its big names, including Brock Lesnar and Shane Carwin, athletes who cut down to make the division's 265-pound limit. And while Struve thinks he's ready for the move skill-wise, he would prefer to take a little more time to put on the muscle he feels is necessary to face the UFC's monster heavyweights.

"Technical-wise I'm sure I'm ready for those guys," Struve told Ariel Helwani on Monday's edition of The MMA Hour. "I think my ground game, my standup, my all-around game is real good. But if you see how big those guys are, they got a lot of weight on them and they got a huge amount more muscle on their frame than me. I'm packing on muscle. I was 253 for my last fight, and I want to go up to 280 or 290. It will take me a couple of years. But I want to say, Joe Silva is the best matchmaker in the world and I'm willing to fight anybody. I'm curious to see where I am in the division right now."

Struve (21-4) has slowly added size to his 6-foot-11 frame since making his octagon debut in February 2009. He was 240 pounds for that UFC 95 matchup with Junior Dos Santos, and has hovered around the mid-240s for most of his fights since then. His bout with Sean McCorkle marked the first time Struve checked in over 250 pounds in his pro career, and even McCorkle remarked before the fight that Struve looked significantly bigger and stronger than he has in the past.

The heavyweight division has some question marks around it. While champion Cain Velasquez knows he will be facing Junior Dos Santos shortly, we still don't have a date for the tangle.

Meanwhile, Lesnar is still on hiatus after October's title loss, Carwin is still recovering from back surgery, and Roy Nelson is on the shelf, embattled in contract issues stemming from a deal he made prior to joining the UFC.

That might leave an opening for Struve to sneak in and become a contender. But to do that, he's probably going to have to get past one of the major names first. Asked how he would fare against Lesnar, Struve was practical.

"His wrestling is maybe the best in the division," he said. "He's a monster but I think I got an advantage in the standup. And fighting on my back? I'll manage myself on my back. I've showed that in my fights."

He showed another example on Saturday, overcoming an early McCorkle takedown and kimura try to sweep into full mount, where he finished his opponent with ground and pound for a first-round technical knockout.

Struve said the kimura was "never close" and that he had no problem finding out how good McCorkle's ground game was first-hand.

"I think I could have won easier," he said. "But I'm always curious to see what a guy can do on ground. I want to test myself. It's good for my experience to be in a submission and work my way out, it's something different that I've experienced so far. And it was good. Everything went smooth. I want to win but I want to show more next time."

Struve has been one of the UFC's most active heavyweights, fighting seven times since Feb. 2009. He said he'd take off the rest of December and get back in the gym in January with the hope of fighting in late March or April.

And after fighting bloody wars in recent bouts, he says he's happy that he emerged from his fight with McCorkle relatively unscathed.

"There's nothing wrong, my muscles are a little sore from the fight but that's normal," he said. "It's good to keep my face in tact for a while."