Donald Cerrone: I Feel Like I'm on the Chopping Block 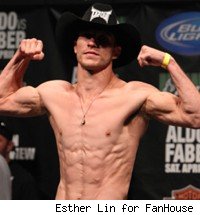 GLENDALE, Ariz. – Donald Cerrone may not be meeting his old pal Jamie Varner for a third time when the WEC rolls out its final event on Thursday night, but that doesn't mean they aren't thinking about each other.

"I would love that fight again, and again, and in the parking lot, and wherever I can get it," Cerrone said at Tuesday's WEC 53 open workouts. "But it'll come in due time. Hopefully he wins his next fight and I can see him in the UFC. I plan on whipping his a-- every chance I get, so I don't ever plan on letting him dictate one round or one second of any fight ever again."

It's a sentiment that's likely shared by Varner, who recently described Cerrone as a "lonely, uneducated hillbilly" in an interview with MMA Fighting. But while Cerrone admitted he wasn't aware of that latest salvo, even he seems to be on the verge of acknowledging that the time might have come for him to finally move on from that rivalry after winning a unanimous decision in their last meeting.

Some habits, however, die hard.

"I don't care what he has to say now," said Cerrone. "I'm focused on my fight at hand. I used to worry about him. All my other fights with Ben [Henderson], everything was about getting through the next guy to get to Jamie Varner. Now I've overcome that. I feel like I got what I asked for and went out there and did everything I said I was going to do. I feel like the drama, that part's over. But the beef? Is he, as a person, still a b-tch? Yes he is, and I still will gladly say that. So if we meet again, we will, but if not, whatever."

For now, Cerrone has plenty to worry about without getting sidetracked with thoughts of Varner. On Thursday he faces former IFL standout Chris Horodecki in a bout that, at least in "Cowboy's" eyes, could go a long way toward determining how and if he enters the UFC once the WEC roster is absorbed at the end of 2010.

"I feel like I'm on the chopping block," said Cerrone. "I'm not a guaranteed UFC fighter yet. I'm a WEC fighter and this is my last payday. So I think I need to go out there and let Dana White know, this is where I want to be, this is what I plan on doing."

The question on many people's minds during Tuesday's workouts, however, was what exactly does Cerrone plan on doing once he's in the cage with Horodecki?

The improved wrestling ability that Cerrone showed off in his win over Varner proved that he has more than one available path to victory. With Horodecki's pedigree as a striker, it's hard not to wonder if Cerrone might look for an advantage on the mat.

While Cerrone acknowledged a desire to show off the grappling skills he's worked so hard to attain, he is still the "Cowboy," and he does still love a shootout. That puts him "between a rock and a hard place," he explained.

"I think I'm a better wrestler, better on the ground than him. I think he better just close his eyes and swing for the fences, man. I'm bringing it. I'm in shape and I come to win. I plan to make waves in the UFC."

And as for the fact that he'll be fighting on the televised portion of the card on Thursday while Varner, an Arizona native, is relegated to the prelims?

"That's just another b-tch slap in his face, isn't it?" Cerrone said. "How do you like them apples, Jamie Varner?"

Some rivalries never die. They just get put on the back burner to simmer for a while.