Dominance of Georges St. Pierre Is in the Details 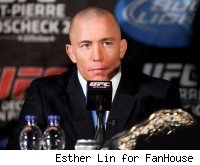 Last Friday, the night before UFC 124, company president Dana White ran into Josh Koscheck in the host hotel, just a block away from the Bell Centre in Montreal. The two shared a few words, and during the conversation, Koscheck shared his prediction that Georges St. Pierre would refuse to strike with him during their championship fight.

The belief that St. Pierre has become a wrestling-dependent, "safe" fighter has become so widespread that even Koscheck -- before the biggest moment of his life -- felt sure it was his opponent's likeliest course of action. It turned out to be the wrong assumption. The fight spent just 68 seconds on the mat, as St. Pierre kept the action standing, where he out-struck Koscheck over five rounds, bloodying him and breaking his right orbital bone en route to a division record-tying fifth straight title defense.

While statistics don't tell the whole story, they help illuminate the fallacy of many criticisms lobbed against the UFC's welterweight champion.

1. UFC Record Streak
Middleweight champion Anderson Silva has the longest winning streak in UFC history with 12 straight victories, but St. Pierre has a historical UFC streak that's every bit as impressive: he's won 30 straight rounds. (By comparison, during his record run, Silva has dropped six of the 29 rounds he's fought.)

For St. Pierre to do what he's done against the caliber of opponents he's faced is stunning. During that time, he's faced BJ Penn, Matt Hughes, Jon Fitch, Thiago Alves and Koscheck twice, among others. It's a level of domination we've never seen before. To win a fight is one thing, but to win round after round requires preparation, concentration and execution of the highest order.

Of course, winning the fight is the ultimate objective, but winning rounds is significant, and during his 30-round stretch, St. Pierre has out-landed his opponents by a tally of 1,067-367, a mind-boggling gap of 700 strikes. He's not just beating them, he's routing them.

2. Complete Game
The big criticism of St. Pierre going into last Saturday's match is that he's too wrestling reliant. Some had their eyes opened when he and Koscheck spent 23:52 of the 25-minute fight on their feet, but the sentiment was probably wrong to begin with.

Over his last five fights, St. Pierre has had nearly perfect distribution of his strikes, throwing 682 standing strikes, and 696 ground strikes. He's complemented his game with wrestling, successfully taking down his foe on 33 of 43 tries (76.7 percent).

Meanwhile, his own defense has been outstanding. Not only is he extremely difficult to take down (Koscheck's first-round takedown against him on Saturday night was the first time GSP had been taken down in over three years), but he's very difficult to hit. His last five opponents have landed only 169 of 540 standing strikes against him (31.2 percent).

Go back further and it's nearly as impressive. His last eight opponents have landed just 32 percent of standing strikes. His last 13 have landed 38 percent. So he's actually gotten better against better competition.

3. Fighting the Best Competition
Detractors might point out that many historical champions have finished at a higher rate than St. Pierre, but how many have faced tougher competition than him?

Compare that with Silva. The longest win streak of an opponent about to face him was Rich Franklin, who had won eight in a row prior to their first meeting in 2006. Since the start of 2008, the longest win streak an opponent brought into a match with Silva was five, done by both Patrick Cote and Thales Leites, two guys who were out of the UFC within two years of fighting him. Since 2006, four of Silva's ex-opponents (Cote, Leites, James Irvin and Travis Lutter) have been released by the UFC. Since that time, not a single one of GSP's former opponents has been released. Not one. So who's really fighting the better competition?

• Won 30 straight rounds, a UFC record
• Won five straight welterweight title defenses, tying a UFC record for the division
• Has 8 straight wins, tied for the second longest streak in UFC history
• During 30-round streak, out-landed opponents, 1,067-367
• Shutout five opponents who had gone 50-6 before facing him
• Was successful on 33 of last 43 takedown attempts

Style is a matter of personal taste, so in the end, the only real criticism detractors have about St. Pierre is that he's not a classic finisher. His recent stretch of three straight decisions, though, is the longest of his career. That's not exactly a drought. Other contemporaries who are considered "finishers" like BJ Penn, Quinton "Rampage" Jackson and even Chuck Liddell have had streaks that long.

Translated, the complaint is that St. Pierre is a finesse fighter in a world of power. But our sport is complex enough that his style should be celebrated instead of denigrated. Football had Barry Sanders, baseball had Greg Maddux, hockey had Wayne Gretzky, MMA has Georges St. Pierre.

Fans craving for violence may not appreciate him, but that doesn't change the fact that in many ways, St. Pierre is the sport's most complete mixed martial artist, and may one day be considered the greatest of all time.