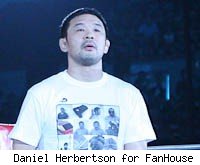 It was well short of the 10 fights we were promised, but on Monday at the ANA InterContinental Hotel in Tokyo, FEG President Sadaharu Tanigawa, DREAM Executive Producer Keiichi Sasahara and the newly announced Dynamite!! Executive Producer Antonio Inoki made five bouts official for FEG's end of year effort.

Marius Zaromskis will defend his DREAM Welterweight Title for the first time against Kazushi Sakuraba who will be making his debut as a welterweight at 41 years old; 2010 K-1 MAX 63 kg Japan Tournament Champion Tetsuya Yamato will return to the FEG ring for the first time since capturing the promotion's first belt at that weight limit to face K-1 débutante Akiyo "Wicky" Nishiura; and UFC veteran Caol Uno will debut as a featherweight against Kazuyuki Miyata.

Also made official were the "special rules" bout between DREAM Lightweight Champ Shinya Aoki and cosplayer Yuichiro "Jienotsu" Nagashima and the MMA bout between Tatsuya Kawajiri and Strikeforce's Josh Thompson. The bout between Jerome Le Banner and Tatsuya Mizuno has not yet been made official despite the Frenchman's management confirming it last week.

Kazushi Sakuraba started his career as a faux-heavyweight, lying about his weight in order to make the minimum weight limit for the 1997 UFC Japan tournament. and through his 14-year career has moved down to light-heavyweight, middleweight and now finally welterweight for his match with the DREAM Champion. Sakuraba currently walks around at around 83 kg (183 lbs) and so to make the 76 kg (167.5 lbs) limit he will likely have to cut weight for the first time in his career.

Marius Zaromskis blitzed the competition in the 2009 DREAM Welterweight GP to be crowned the promotion's first champion in the division and was signed to Strikeforce shortly after. His arrival on the US scene made much less of an impact though as he suffered two first round knockouts to Nick Diaz and Evangelista "Cyborg" Santos and most recently was involved in an unfortunate six second no contest with Waachim Spiritwolf.

Tetsuya Yamato dropped a decision to Koya Urabe in regional promotion Krush in his last outing while Akiyo "Wicky" Nishiura has been working for the past year with Matt Hume in Seattle and was rewarded with a first round TKO over Hideo Tokoro at DREAM.14, but most recently lost a controversial split decision to Mitsuhiro Ishida at DREAM.16. "Wicky" has been targeted for some time for a K-1 rules bout due to his aggressive striking style and a perceived weakness in takedown defense (something that he claims has been rectified under Hume) but injury has prevented a fight until now.