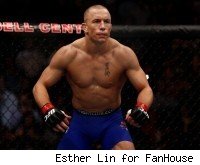 MONTREAL -- It's going to happen.

It's going to require a little patience, but if Georges St. Pierre and Anderson Silva win their next fights, they are headed for a collision course. That's my own feeling, based off the words of UFC president Dana White, who indicated he's running out of reasons to deny the fans a superfight that many are dying to see.

St. Pierre vs. Silva is in many ways the biggest fight the UFC can make, two dominant champions deep into their reigns, from different parts of the world and with vastly divergent styles.

For the longest time, fans have asked for it, but White always thought Silva would one day be on his way up a weight class to light-heavyweight, but it's a move Silva has never made. Instead, outside of a pair of short but successful dips into the 205-pound waters, he's stayed parked at middleweight, a winner of 13 straight fights, and seven consecutive title defenses.

For the longest time, White thought St. Pierre was just too small. He used to cut from 185 pounds down to 170; Silva sometimes gets as large as 210 between fights. But St. Pierre says he walks around at 190 now, and the gap between him and Silva is not even as great as the one Cain Velasquez overcame to beat Brock Lesnar a few months back.

Moreover, neither Silva or St. Pierre has anything much to prove by staying in their respective divisions. Even White can admit that.

"I don't like guys talking about fighting each other at different weights until they've done what those two have done," he said. "And they both have done it. It's hard to say no. It's hard for me to say this fight doesn't make sense."

There's more than one catch to it happening, though. Not only do Silva and St. Pierre both have to win their upcoming fights (Silva has Vitor Belfort on Feb. 5, St. Pierre will likely fight Jake Shields in the spring), but they'll have to agree on a weight.

St. Pierre said on early Sunday morning that if he went up to middleweight, it would be for good. He'd surrender his welterweight belt, put on some muscle and stay at 185 instead of yo-yoing back and forth.

If that was the case, it would be an easy set-up for White and co.

But another possibility would be a catch weight fight. Silva has said in the past that he's capable of going lower than 185. Perhaps they could meet at 182 or even lower.

Whatever number they agree on, they need to agree on a number. St. Pierre is fast running out of fresh challengers. His fight with Shields is likely to go down on the upcoming April 30 event in Toronto, an event he said he would like to fight on. Beyond that, he's beaten most of the top contenders in the division. It's the same thing for Silva, who beyond Belfort and Yushin Okami, has few ready-made fresh UFC matchups (he fought Okami outside the UFC years ago).

A Silva-St. Pierre fight would be fascinating from a matchup standpoint. St. Pierre has superb wrestling but also features dynamic striking in his arsenal. Silva is a brilliant striker with good takedown defense and a dangerous jiu-jitsu game. The noted strategist St. Pierre would have a tough time finding a hole to exploit, and Silva might not find St. Pierre's chin as easy to find as that of most of his other opponents.

White seems committed to following through on his promise to giving Shields a shot at St. Pierre, but beyond that, he's open to other, bigger possibilities.

Where once he said it wasn't going to happen, now he admits that if demand is high enough, the fans can make Silva vs. St. Pierre a reality.

One more win each is all it's going to take. The fans want it. The fighters are interested. It's going to happen.