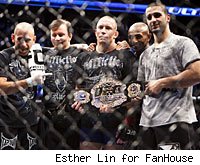 MONTREAL -- It was a fight that was personal from the beginning, the stakes rising and the rivalry growing in intensity with the six weeks Georges St. Pierre and Josh Koscheck spent together taping The Ultimate Fighter reality show in Las Vegas. By the time it rolled around, the usually underspoken St. Pierre was uncharacteristically promising a whipping for his longtime antagonist.

True to his word, St. Pierre bullied the bully at UFC 124, dismantling Koscheck in a five-round unanimous decision before a North American MMA record attendance of 23,152 at the Bell Centre.

Eschewing the takedown and control game that his critics decry as overly safe, St. Pierre easily outstruck Koscheck in a largely standup fight, much to the delight of the capacity crowd that exploded at every punch, elbow and kick.

Still, GSP felt the performance fell short of his perfectionist's tastes, as he failed to finish Koscheck as he predicted.


"I wanted to finish by knockout or submission," St. Pierre said afterward, the left side of his face marked with a few scratches. "He's very tough. I closed his right eye, so I was going a lot with the hooks and the high leg kick to knock him out. But he's very good and very tough. My punches didn't land on his chin as much as I want. It was a good fight, but I wanted to finish him. That was my goal and I did not reach my goal."

Despite that, it was a party atmosphere from beginning to end as the partisan crowd showered the challenger with boos before practically drowning out octagon announcer Bruce Buffer when he introduced the hometown champion.

St. Pierre battered Koscheck from the early minutes, peppering him with left jabs that had Koscheck's eye swelling badly by the end of the first round. According to Compustrike, St. Pierre outlanded him 27-7 in the opening five minutes, including nine power strikes.

While Koscheck became one of the few men to stay off his back for extended periods of time against St. Pierre, he was target practice on his feet, especially after his eye swelled shut around the third round. Koscheck headhunted with the overhand right, but St. Pierre repeatedly circled free and punished him with jabs and leg kicks.

By the finish, St. Pierre had outlanded Koscheck by a stunning margin of 143-30.

Josh Koscheck takes down GSP to finish round one at UFC 124 on Saturday, Dec. 11, 2010 at the Bell Centre in Montreal, Quebec, Canada.

Josh Koscheck charges towards Georges St-Pierre at UFC 124 on Saturday, Dec. 11, 2010 at the Bell Centre in Montreal, Quebec, Canada.

Josh Koscheck looking to knock out Georges St-Pierre at UFC 124 on Saturday, Dec. 11, 2010 at the Bell Centre in Montreal, Quebec, Canada.

Josh Koscheck checked his foot in between rounds at UFC 124 on Saturday, Dec. 11, 2010 at the Bell Centre in Montreal, Quebec, Canada.

Georges St-Pierre listens to his corner's advice at UFC 124 on Saturday, Dec. 11, 2010 at the Bell Centre in Montreal, Quebec, Canada.

Arianny Celeste holds up the Round 4 sign during Georges St-Pierre vs. Josh Koscheck at UFC 124 on Saturday, Dec. 11, 2010 at the Bell Centre in Montreal, Quebec, Canada.


"My strategy is always to do what my opponent doesn't expect," St. Pierre said. "In the first fight I beat him with wrestling, because he wasn't expecting it. Tonight, I beat him with boxing. He worked his escapes and I knew with the sweat, it would be a stand-up war.

St. Pierre and Koscheck had previously fought at UFC 74 in August 2008. At the time, St. Pierre was coming off his first career knockout loss, dropping the title to huge underdog Matt Serra in a stunner.

Fully showcasing the advanced wrestling game that would become a staple of his future offense, St. Pierre outwrestled Koscheck en route to a decision win. But even in defeat, Koscheck had his moments, taking the first round on the scorecards of two of the three judges, making him the last man to win a round before Saturday night's action.

This time, St. Pierre completely changed tracks, minimizing his takedown tries while focusing on circling away from Koscheck's power hand. By the third, St. Pierre was firing off left hooks and head kicks, looking for the knockout blow as Koscheck's eye swelled shut. At the end of the third, the cageside doctor took a look at Koscheck's eye but allowed him to continue.

"I have a lot of respect for Koscheck," UFC president Dana White said. "The doctor gave him an out and he didn't take it. He stayed in there and tried to win."

"I came in to keep he fight on the feet and obviously put him on his back," Koscheck said afterward. "He had a great game plan, and executed it very well. It shows why he's the pound for pound No. 1 fighter in the world."

Afterward, the talk turned to a potential superfight with Anderson Silva, the UFC's middleweight champion, and the man that White believes is the pound-for-pound best.

St. Pierre likely has former Strikeforce champion Jake Shields ahead of him, but looming is a possible move up in weight to face Silva. Particularly with the recent announcement of a show at Toronto's massive Rogers Centre, it seems a possibility the UFC may consider.

But he couldn't deny the lure of a major fight between two of the UFC's biggest stars, saying he's essentially cleaned out the division and "beaten everybody."

"I don't know, I'd really have to sit down," White said. "If Georges said he was going to go at 185 and stay there, then it would be for the title. It would be a superfight for the title."

St. Pierre said a fight with Silva would necessitate him moving up in weight class for good. He usually weighs around 190 pounds, and said he'd have to get up to about 200 pounds so he could compete with the bigger athletes of the middleweight division. There is also the possibility that Silva could cut lower than 185 and the two could meet at a catch weight.

It would be the ultimate challenge for a champion that seems to be growing more and more confident as he continues to lengthen his reign over the division. In critiquing his performance, the buttoned-up professional even showed a previously unseen nasty streak that illustrated his competitive fire.

"I wanted to take him out. I don't care about the damage on [his] face," he said. "If I don't do damage and hit him clean on the chin and knock him out, that's what I want and I would feel good. I need that edge, I wanted to finish him. It's a mental thing. I want him to look at me and know I'm thinking, 'I finished you.'"

He didn't get the finish, but he bullied the bully.

After UFC 124, it seems like anything is possible for St. Pierre. King of the city. King of his division.