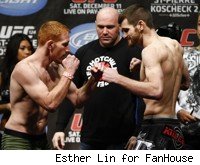 MONTREAL -- This is the UFC 124 live blog for all the undercard bouts in support of tonight's pay-per-view card at the Bell Centre.

Josh Koscheck takes down GSP to finish round one at UFC 124 on Saturday, Dec. 11, 2010 at the Bell Centre in Montreal, Quebec, Canada.

Josh Koscheck charges towards Georges St-Pierre at UFC 124 on Saturday, Dec. 11, 2010 at the Bell Centre in Montreal, Quebec, Canada.

Josh Koscheck looking to knock out Georges St-Pierre at UFC 124 on Saturday, Dec. 11, 2010 at the Bell Centre in Montreal, Quebec, Canada.

Josh Koscheck checked his foot in between rounds at UFC 124 on Saturday, Dec. 11, 2010 at the Bell Centre in Montreal, Quebec, Canada.

Georges St-Pierre listens to his corner's advice at UFC 124 on Saturday, Dec. 11, 2010 at the Bell Centre in Montreal, Quebec, Canada.

Arianny Celeste holds up the Round 4 sign during Georges St-Pierre vs. Josh Koscheck at UFC 124 on Saturday, Dec. 11, 2010 at the Bell Centre in Montreal, Quebec, Canada.

Round 2: Audinwood has a hint of blood leaking from his nose to start the round. Makdessi lands a kick to the face as he continues coming forward. Makdessi backs Audinwood against the cage with a combination. Audinwood shoots in with 1:30 left and briefly gets Makdessi to the mat, but he doesn't stay there long. Makdessi doubles up on a left hook as he keeps scoring. Another round for Makdessi 10-9.

Round 3: A hard leg kick from Audinwood to start the round. He has to know he's behind. Makdessi keeps pressing forward and scoring. Audinwood lands a right but Makdessi answers moments later. A Makdessi head kick grazes Audinwood as we go under two minutes left. Audinwood never really showed a level of desperation as the fight kept the same pace in the final minute. Makdessi chased Audinwood down with a left hook/right hand combo and took the third, 10-9.

Round 1: Canadian Grant is the fan favorite in this one as we get started. Grant walks Almeida down, and Almeida throws an inside leg kick trying to slow him. Almeida shoots in and takes Grant down. Almeida stands over him and scores with an over the top right. Back in Grant's guard, Grant throws a pair of elbows from the bottom. Almeida stands up again and lands two hard rights. Almeida seems more interested in ground and pound than submissions. Grant works against the cage and uses it to get to his feet with two minutes left. Almeida drags him back down quickly. Grant defends well for a while, but Almeida begins finding holes inside of 45 seconds. More strikes from the top as Almeida takes it 10-9.

Round 2: Another big takedown from Almeida early, ducking under a hook to get it. Almeida works hard to pass into side control. He tries to jump into full mount but Grant holds him off. A scramble and Almeida ends up standing over him again, then back into guard. Moments later, Grant gets to his feet and tries to take Almeida down but Almeida ends up on top against the cage. Grant takes Almeida down with 30 seconds left. Almeida seemed to be protesting some part of the sequence, but action continues. Still, the round goes to Almeida 10-9.

Round 3: The story of this fight is Grant just can't stay on his feet, as Almeida uses a double leg to take him down in the opening 30 seconds. Almeida briefly takes his back, then lands hard elbows from the top. Grant is a tough guy but this has to be frustrating for him. Almeida just continues to smother him from the top, finally moving into full mount with two minutes left. Hard strikes from the top cause Grant to readjust, but he's getting pummeled now. Grant ended up on top after Almeida tried a choke but Almeida got to his feet quickly. Should be a decision win for Almeida after another 10-9 round.

Round 1: The two touch gloves and we're underway. We're into quick with a serious power-punching exchange. The lefty Pierson is out quick. Riddle's got his back to the fence early. A Pierson punch rocks him backward. They clinch and Pierson throws a series of knees to the thighs. Back in space now, and Pierson uses the right jab to keep Riddle at bay. Pierson drops Riddle with a right hook and follows him down. Pierson with knees to the body. Riddle tries to get up but Pierson slams him back down and takes his back. Riddle tries to spin free but Pierson ends up in side control and throws more knees to the body. All of them connect. He takes Riddle's back again, but Riddle escapes as we go under a minute. Pierson's standup is faster, crisper and he wins the round big, 10-8.

Round 2: Riddle comes out quickly, but Pierson connects with a left hook as his standup edge continues to hold. Riddle shoots in for a double leg, but is stuffed. The pace slows a bit as they get back to the standup. The fans begin a "Let's go Pierson" chant. Pierson continues to connect with the jab. Riddle lands a hard right and tries to jump into a guillotine, but Pierson escapes. They touch gloves in respect. Pierson shoots in for a takedown with 45 seconds left and Riddle ends up on top. A much better round for Riddle but Pierson's standup gives him the 10-9 on my card.

Round 3: Consecutive right hooks both land for Pierson early in the final frame. Pierson's right jab is laser-targeted to Riddle's jaw as he just connected about five times in a row while Riddle swung and missed wildly. Pierson is bleeding from under his right eye while Riddle's is marked under his left eye. It's a slugfest of a third round as the crowd shows their appreciation with a loud cheer. Riddle's left is still swinging at air. He's more active in volume but Pierson's landing at a much higher rate. Riddle tries to shoot, and Pierson sprawls with 30 seconds to go. The two exchange bombs as the horn blows. A very close round, but I score it to Pierson 10-9.

Round 1: The two touch glove and we're underway. Natal puts Bongfeldt on his back quickly but Bongfeldt's right back to his feet. Moments later, he's back down again. Natal worked hard to get his back, but Bongfeldt turned into him and reversed before Natal got back up. Moments later, Natal took him down again. Natal got his back, and this time got his hooks in to control the position. He tried the rear naked choke, but couldn't sink in his arm, and Bongfeldt reversed again, ending up on top. It turned into a submission grappling match briefly with Bongfeldt ending on top. Natal took the round 10-9.

Round 2: Bongfeldt scored with a right hook early. Natal fell to his back but he looked to slip rather than be hurt. Bongfeldt followed up with wild strikes from the top, but Natal avoided most of them. Bongfeldt tried an arm bar but Natal saw it coming and worked free. Bongfeldt tried a takedown; Natal used the fence to stop in and the referee warned him he'd take a point away if he did it again. Natal ended up on Bongfeldt's back a moment later. He moved to full mount with 90 seconds left, and Bongfeldt gave his back. After a scramble they were upright. Not a lot of continued momentum. A close round, but Natal gets the nod, 10-9.

Round 3: Weird moment to begin the round as action began and Natal asked for timeout as he forgot his mouthpiece. It was granted and action restarted. Natal looks a bit gassed and is in retreat mode and Bongfeldt comes forward. Bongfeldt finally sees it after Natal stumbles backward and runs towards him, landing a right cross. Natal goes down and Bongfeldt follows him. Two minutes left. Bongfeldt's in full mount and he delivers punches and elbows from the top. Natal works back to half-guard with :30 left. Bongfeldt goes back to full mount, letting loose with punches and elbows as the horn blows. 10-9 Bongfeldt, bordering on 10-8.

Round 1: Ten seconds in, Bocek takes Hazelett down, and the two submission artists are in their world. Bocek quickly gets side control but Hazelett recovers back to guard. Bocek gets full mount and goes to a gogoplata, then switches to a triangle. Hazelett survives for a bit, but Bocek pulls his head in, and Hazelett taps out.

Round 1: The two trade early, and Miller changes level and takes Doerksen down. Miller tried to jump into full mount but Doerksen worked free. Miller tried to snatch a guillotine, and they rolled to the mat, with Miller on top. Both are very good grapplers and they both work hard for position, Doerksen trying to escape and Miller trying to maintain and even advance. Miller drops an occasional elbow but nothing earth-shaking. Miller opens up with some harder strikes with less than a minute left and Doerksen quickly ties him up. By virtue of his cage control, Miller gets round 1, 10-9.

Round 2: Doerksen lands a left hook early. Miller takes him down, but Doerksen quickly reverses and ends up on top. Doerksen punches to the body as Miller leaves few openings. Doerksen stands over him, and Miller uses the opportunity to get back to his feet, where he takes Doerksen down. Doerksen looks for a kimura. Miller defends. Doerksen gives it a yank, and they roll with Miller pulling his arm free. Miller with strikes from the top. A close round, but Miller, 10-9.

Round 3: Miller scores early with a right hook/right uppercut combo, which moves Doerksen backwards. Miller follows with a takedown. Doerksen cut Miller with an elbow from the bottom, but Miller is maintaining the position. Miller got half-guard against the fence, where he landed right hands to the face. Doerksen soon regained guard. Miller was able to land the occasional shot from the top, but Doerksen avoided any major damage. Still, Miller controlled the position for nearly the entire round, taking it 10-9.