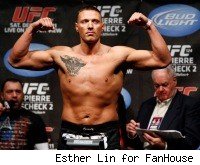 MONTREAL -- If you happen to be watching UFC 124 on Saturday night, just before Georges St. Pierre and Josh Koscheck tangle, you will be presented with a heavyweight fight.

When the first fighter walks out, your response might be: "Who?"

During that event, McCorkle embraced the nickname "The Curtain Jerker," an old professional wrestling term for wrestlers who started off the night's action in the first match.

But on Saturday night, McCorkle will go from warm-up act to featured attraction, as his bout with Stefan Struve will be the last match to go on before the long-anticipated rematch between St. Pierre and Koscheck.

It marks the first time since UFC 68 that a fighter has gone from the first match of a card to essentially the co-main event in his next. Danish welterweight Martin Kampmann was the last one to do it, fighting in the first match of the TUF 4 Finale, then facing Drew McFedries just before Randy Couture recaptured the heavyweight championship in Columbus, Ohio.

Like Kampmann back then, McCorkle's match isn't officially being promoted as the "co-main event" by the UFC, but the second-from-the-top billing is unmistakable; this match matters.

"It's a lot sooner than I expected," McCorkle said. "I didn't even know until I got here that it was the co-main event. It should be the main event. Who wants to see the two best welterweights in the world fight when you can watch two heavyweights try to avoid gatekeeper status?"

That sense of humor, along with a surprising self-awareness and a constant needling of his opponents have given him dimensions to those fans that are aware of him.

He's had no problem poking fun at Struve, particularly online, where McCorkle is infamous for his postings on the MMA forum The Underground.

On Wednesday, the two opponents briefly crossed paths in a workout room, with McCorkle flashing a friendly smile at Struve and offering a fist-bump. Struve tapped his fist but his face remained stoic as he quickly shuffled past McCorkle.

"He's a young kid so he probably takes the trash-talking a little more seriously than a grown man would," McCorkle said with a shrug.

But to the 34-year-old McCorkle, all that stuff is secondary to the fight. The 6-foot-7 Indiana-based fighter says he's well prepared after spending time training with former UFC heavyweight champ Tim Sylvia along with current UFC heavyweight Matt Mitrione.

He says the 6-foot-11 Struve's length shouldn't be a problem unless he decides to continually jab and run.

"I don't think Struve's got the big one-punch knockout power," he said. "His strengths is as far as on the ground, he's good off his back. You guys haven't got to see me on top against a real opponent. I'm better on top than the bottom. I think I can take him down if I choose to do that. And I can hold him down and keep him there."

Perhaps most endearing about McCorkle right now is his everyman outlook on his career. He realizes the opportunity in front of him. He realizes the pressure and potential reward. And he realizes that even though many people might not know who he is just yet, he has the chance to make many new fans on Saturday night.

But even that is not his biggest motivation. At 10-0, McCorkle's yet to lose, and a fear of losing is a personal inspiration as he gears up for the biggest moment of his fighting life.

"I always picture myself at Best Buy selling people computers with a little blue shirt on," he said. I could be doing that all day instead of doing this. That drives me to perform at a higher level. I don't want to work at another job, I really don't."