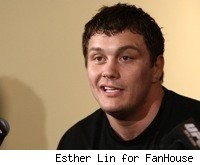 In the last edition of Fighter vs. Writer, I smoked "Mr. International" Shonie Carter by a healthy margin with my UFC 123 picks. The victory was sweet, and somewhat rare, but it's over now and all that matters is the next showdown.

With UFC 124 going down in Montreal tonight, I tapped UFC heavyweight and former "Ultimate Fighter" contestant Matt Mitrione to go head-to-head with me in a fight-picking battle to the death.

When it came to making picks, Mitrione was easily the most enthusiastic and verbose opponent I've faced in this series, but is he the most formidable? Find out below, but be warned, some of his picks may shock you...

Mitrione's pick: Koscheck by knockout. Said Mitrione, "I think he'll be able to test Georges' chin. I think it'll be a TKO kind of knockout. I don't think he'll put him to sleep. I think it'll happen in the late second or early third." Not only is Mitrione picking the upset, he's also putting aside his personal feelings about Koscheck, who he admits he doesn't particularly like, in order to do it. "I think he's kind of a pain in the ass, to be honest with you," said Mitrione. "Just personally, he's a tough guy to like, but he is a good fighter."
My pick: St. Pierre via decision. I agree that Koscheck is better than people are giving him credit for, and I also agree that he's a tough guy to like, but GSP has been damn near perfect in his last few outings. I think he'll take Koscheck apart gradually, but thoroughly.

Mitrione's pick: McCorkle via submission. Even though Mitrione and McCorkle are friends and training partners, Mitrione still struggled a bit with this one, explaining, "Corkie is my guy. I have to choose Corkie, but if he doesn't execute his game plan, he could be in trouble. ...If Corkie gets him to the ground he'll be in pretty good shape, and I think he'll win by submission in the first. If he can't get Struve to the ground, it could be really ugly for Corkie."
My pick: McCorkle via decision. Struve is a tough kid and a good stand-up fighter, but I don't think he'll be too difficult for McCorkle to get to the mat. Once there, McCorkle's strength and submission skills will make the difference.

Mitrione's pick: Miller by TKO. "I'm a Miller family fan, so I'm going to take Jim Miller. I think Oliveira's a tough dude, but the Miller boys are animals. I wouldn't be surprised if he comes out and lets them fly, probably end it late in the first round."
My pick: Oliveira by decision. This is a tough one to call, and I do feel a little weird going against one of the Miller boys, who are, as Mitrione said, total animals. That said, Oliveira is a good all-around fighter himself, and I think his aggression will win it on the scorecards.

Mitrione's pick: Stevenson via decision. Mitrione played it close to the vest on this one, asking me who I was picking and why. When I explained that I thought Stevenson was the better grappler and would follow a game plan that helps him exploit that, Mitrione replied, "You know what? I actually agree with that."
My pick: Stevenson by decision, for the reasons I just explained. And Mitrione agrees with me. So there.

Mitrione's pick: Alves via KO. Mitrione really struggled with this one, pausing several times to say things like, "Oh, that's such a good fight!" As people, Mitrione said he likes both Alves and Howard, and hates to pick against either one. "I feel bad saying this, but I'm going to go ahead and say Thiago, because he has a whole lot to prove to his boss. Those two are going to go at it, and it's going to be an early second round knockout-knockout."
My pick: Alves via KO. I'll be surprised if it goes more than one round, honestly. Not that Howard isn't a capable fighter, but if you have to stand in front of Alves for too long, you're going to get roughed up. Now that Alves appears to have his weight issues under control, watch out.

Mitrione's pick: Bocek via decision, though he admitted he doesn't know much about either man. "I'll say Bocek by decision. But honestly, I couldn't pick either of those two out of a crowd."
My pick: Hazelett via submission. He's got a phenomenal ground game, and maybe at lightweight he'll be able to use it more without getting punished severely for his attempts to pull guard against bigger fighters.

Mitrione's pick: Doerksen via submission. As previously noted, Mitrione loves the Miller brothers, and this pick was another intense internal struggle for him. After exclaiming, "this sucks!" several times, Mitrione explained, "Joe is damn good. He's dangerous as all hell. So I gotta go with Joe Doerksen. I'm going to say third-round submission."
My pick: Miller via decision. There are plenty of ways this pick could go wrong, but when Miller fights smart and fights to his strengths, he's very tough to beat. Even when he's fighting a Canadian in Canada.