UFC 124's Fight Within the Fight: The Wrestling of Koscheck & St. Pierre 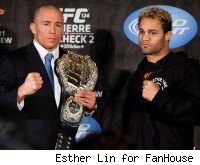 MONTREAL -- Wrestling in mixed martial arts is somewhat equivalent to special teams play in football. It's grinding, it's unglamorous, and nobody pays specifially to watch it. Yet ultimately, it can be one of the most important factors in winning and losing.

UFC 124 main eventers Josh Koscheck and Georges St. Pierre have used wrestling as the basic building block of their respective careers. For Koscheck -- a former NCAA All-American and wrestling champ -- it was in the early stages, when he had little more to fall back on. For the champion St. Pierre, it was upon realizing he needed to add the extra element to his arsenal.

The fight within the fight of who controls the wrestling game could well decide who emerges from UFC 124 as the UFC welterweight champion.

St. Pierre has seemingly mastered the art of the takedown. According to Compustrike statistics, the Canadian has successfully landed 46 of his last 55 takedown tries, an astouding 84 percent success rate. Included in that number is a perfect 2-for-2 against Koscheck at their UFC 74 encounter, which St. Pierre won by unanimous decision.

Koscheck says he was unprepared for St. Pierre's strategy, figuring like many others, St. Pierre wouldn't even bother trying to outwrestle him. It was a pivotal oversight, which in effect likely cost him the match.

This time around, Koscheck knows it's crucial to set the tone early and stop St. Pierre's takedowns, or at least put doubt in his mind.

"That's a big stepping stone," Koscheck told MMA Fighting. "That's huge for me to be able to stop his takedowns right out of the gate. I'm not sure what his game plan is and I don't really care. But I know what I've got to do to win this fight."

For this golden opportunity, Koscheck added an attention to detail that perhaps was missing in the past. Saturday will mark his 20th professional fight, but this training camp was the first in which he sat down to study film on his opponent, hoping to learn tendencies and set-ups regarding St. Pierre's takedowns.

Alongside of him all the while was American Kickboxing Academy teammate and former US Olympic freestyle wrestler Daniel Cormier, who worked with Koscheck in preparing for St. Pierre's style.

Like Koscheck, Cormier is confident that the scouting has uncovered repeated sequences used by St. Pierre that will give Koscheck an edge in predicting what's coming.

For his part, St. Pierre says not to expect any of what you've seen in the past, explaining that he continually adjusts his game plans to suit his opponent. What works against one fighter might not work on another, and he noted that his wrestling against Koscheck would have to be much sharper than it was against his most recent opponent, Dan Hardy.

"I knew I could take [Hardy] down, go straight through him without any setup," St. Pierre said. "I didn't really set it up. Koscheck is a good wrestler. I cannot go and fight him like I fought Hardy; he's going to see it coming since he wrestled since he was four years old."

Regardless of the setup, if Koscheck can stop the shot, his camp believes it will result in multiple benefits for him. First, it will obviously leave him in a more desired position of being upright. Second, it may serve to create doubt in St. Pierre's mind. And third, it could tire out St. Pierre.

"The dynamic of the fight changes if he has that doubt in his mind about getting that takedown," Cormier said, "And, when you're getting your takedowns defended, it's harder. No matter how well conditioned you are, it's hard to wrestle for 25 minutes so hopefully, Kos can stop some takedowns and we can put Georges on his back."

Team Koscheck hasn't talked about it much -- or maybe it just hasn't been asked of them -- but they have every expectation of taking St. Pierre down during the fight.

It will be no easy task. In their first fight, Koscheck took St. Pierre down once, but he's one of few men to actually accomplish the feat. According to Compustrike, St. Pierre has been taken down just four times over his last 13 fights.

Perhaps even more telling? That Koscheck takedown of St. Pierre in August 2007 was the last successful try against him.

St. Pierre says he expects Koscheck to fall back on his roots.

"He doesn't plan to stand up," he said. "He's going to try to put me on the ground, and that's what I train for. He's been talking a lot. He's a very predictable guy. He's very easy to manipulate. I know him very well and he says he wants to stand up and bang? Everybody says that. But when you stand up and bang it's like you flip a coin and it's not the best guy that wins when you do that. It's not a smart way to fight."

For all of his collegiate wrestling accolades, Koscheck has converted just nine of his last 19 takedown tries.

Of course, Koscheck's pre-fight stance about putting St. Pierre on his back could be posturing or mind games, but it's clear that at the least, he realizes that he cannot let St. Pierre set the pace and tone for the potential five-rounder.

If he does, it could be a long night.

The setups and executions of wrestling may not be the flashiest part of MMA, but the game within the game could well determine who walks away with the gold.