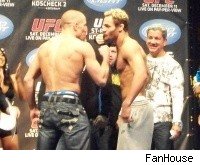 MONTREAL -- There are 22 fighters on the UFC 124 card, but as far as most people are concerned, only two matter. UFC welterweight champion Georges St. Pierre and challenger Josh Koscheck are the stars of the show, and after a fight week filled with back and forth, the pair finally took to the scale in their last official act before stepping into the cage for their rematch.

After weighing in at the welterweight championship limit of 170 pounds, an animated St. Pierre boldly stated that his constant antagonist would go down hard, before a screaming throng of fans collected at the Bell Centre.

"I guarantee you that tomorrow, the bully will be bullied," St. Pierre said, making the motion of holding the title belt around his waist."

St. Pierre bounded up the steps to the cage to weigh in, not even stopping to pose for the crowd as he seemed in a rush to confront his challenger. After they both weighed in, he stood toe to toe with Koscheck in a pre-fight pose as the two chattered back and forth.

It was an uncustomary reaction for St. Pierre, who has seemed more eager than usual to engage Koscheck verbally during fight week. But come fight night, St. Pierre said he'll be the one calling the shots.

"I'm motivated but I'm going to fight smart, you know," St. Pierre said. "He tries to put me off track. That's what he wants. I'm not going to do it. I'm going to kick his ass tomorrow."

Koscheck, who checked in at 169 pounds, reveled in the serenade of boos that came his way at his appearance, taunting them crowd for more.

"The talk is over," he said to the Montreal fans. "He's got to represent all you guys booing. Thanks for coming out, but tomorrow night, I'm going to put Georges St. Pierre to sleep."

The only moment of drama in weigh-ins surrounded Thiago Alves. The welterweight has had issues making the division's limit in the past, and was told by UFC president Dana White that he was on his last chance. But under new strength and conditioning coach Mike Dolce, he seemed loose and relaxed, flashing a thumb's up after he made 171 pounds for his fight with John Howard.

The Montreal crowd was in a festive mood all day waiting for St. Pierre. At one point during a question-and-answer session with UFC heavyweight champion Cain Velasquez, one fan proposed to his girlfriend. She said yes. At another point, the collected group of thousands sang "Happy Birthday" to a boy that will turn eight years old tomorrow.