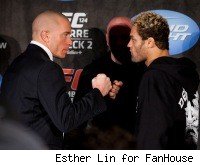 MONTREAL -- Georges St. Pierre swears up, down and sideways that Josh Koscheck has the triple curse on him: he's a wrestler, he talks trash, and he's a rematch. St. Pierre says he excels at facing anyone who fits into any of the categories; Koscheck fits all three.

For those of you who weren't surfing the MMA tidal wave until recently, St. Pierre faced Koscheck back in August 2007, winning via unanimous decision. And if you figure that history will repeat and the champion will dismantle the challenger, let it be known that Koscheck is the last man to win a round from St. Pierre, taking the first round in their bout.

Koscheck showed he can hang with St. Pierre, but three years later at UFC 124, can he can go all the way?

It's certainly going to be an uphill battle for Koscheck (15-4), an orthodox fighter with a collegiate wrestling pedigree and an ever-present chip on his shoulder.

Probably the biggest key to the fight will be wrestling, and it works in both directions.

For Koscheck, he knows he's going to have to limit St. Pierre's takedowns. St. Pierre has become a wrestling machine over the last few years, successful on 84 percent of his takedown attempts (46 out of 55) over his last 13 bouts. With mixed martial arts judges clearly influenced by takedowns and topside control, St. Pierre's game plans have given him a ready-made formula for victory even when he can't finish an opponent. In fact, he's won 25 straight rounds dating back to August 2007.

St. Pierre (20-2) gets a bad rap as a fighter who is overly reliant on his wrestling (47 percent of his fights are spent in the standup position, 53 percent on the ground), and lately, he's also been criticized as a non-finisher (he's finished three of his last six fights). Those splits may not be up to the level of excitement demanded by many fans, but they do show St. Pierre's versatility; he's equally comfortable everywhere, and he's capable of winning any kind of fight.

Koscheck says he sees holes, or at least openings, in St. Pierre's approach. Because the champ likes being the aggressor, it's probably going to be dependent on Koscheck to turn the tables and take the lead instead of reacting to what St. Pierre wants to do. Many fighters seem to walk into a cage against St. Pierre thinking about stopping the takedown first and foremost, and in some ways at the expense of their offense. Koscheck is one of the few fighters with the background to attack GSP's wrestling.

For St. Pierre, he's going to have to keep doing what he does best, and that's transition back and forth between combinations and takedowns.

On his feet, he is dynamic and varied in his combinations, but he's also quick enough to expose any opponent who over-commits to an exchange, and that man is likely to find himself on his back.

But he must be on guard for Koscheck turning the tables on him. Koscheck is one of those who has called St. Pierre out as boring for what he believes is conservative game-planning and execution. But Koscheck conveniently leaves out the fact that when he faced Paul Daley in the contenders' bout that got him his current title shot, he took Daley down four times and spent 12 of the fight's 15 minutes on the ground, well aware of the advantage he held there against Daley. So regardless of what he says, he understands that sometimes you have to do what's best, instead of what's most exciting.

And Koscheck has had plenty to say this week, trying to goad St. Pierre into a messy fight. After years of experience, GSP is unlikely to fall into his trap, and he'll play his own game. Despite Koscheck's years as an NCAA All-American, St. Pierre applies wrestling better in the MMA game, so advantage GSP.

In the standup, they're two totally different fighters. St. Pierre favors accurate combos while Koscheck spends more time head-hunting for the knockout blow. This is easily seen in the stats, as St. Pierre lands 51 percent of his standing strikes while Koscheck lands just 33 percent, according to Compustrike.

Expect those numbers to hold fairly true on Saturday.

While the current odds placing St. Pierre as a 5-to-1 favorite are ridiculously high, he's a favorite for good reason. He's the more dynamic striker, he applies wrestling better to MMA, and he always comes in with the game plan likely to give him the best chance at victory.

We'll be able to tell a lot about this fight in the opening round. Can Koscheck stop the first couple of takedowns? If he can take that dimension away, it becomes a much different fight. Or does he become the one to take GSP down? Then you can put this one on upset alert. But the odds are against either. St. Pierre hasn't shown many holes, and it seems nearly impossible that he can be outworked over five rounds. The likelihood of a knockout right hand seems remote.

Koscheck's durability will keep him in the fight, but St. Pierre has too many ways to control the action. St. Pierre via unanimous decision.