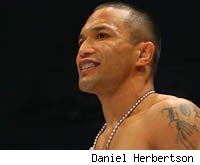 UFC president Dana White has made it no secret over the years that he has been interested in signing Norifumi "KID" Yamamoto. With sources indicating that Yamamoto had a falling out with FEG post-DREAM.14, finally one of Japan's top featherweights will be making his way to the UFC, White revealed via twitter on Friday.

Yamamoto isn't the only fighter that has been poached from DREAM this week, top 10 featherweight Michihiro Omigawa has also re-signed with the UFC this week and will be making his debut against Chad Mendes at either UFC 126 in February or UFC 128 in March.

Yamamoto put together a 13-fight winning streak from 2002-07, and was considered one of the best pound for pound in the sport. A knee injury and marijuana scandal in July 2008, led to Yamamoto taking 10 months away from the sport but "KID" was not been able to recover his form; dropping decisions to Joe Warren and Masanori Kanehara on his return. Yamamoto ended his tenure at DREAM on a winning note however; scoring a first-round knockout over Federico Lopez at DREAM.14.

Omigawa first fought under the UFC banner as a lightweight in 2007-08, dropping two decisions to Matt Wiman and Thiago Tavares. Following his exit from the promotion, Omigawa dropped down to featherweight and has since claimed himself a consensus top 10 ranking with wins over Marlon Sandro, Hatsu Hioki, Hiroyuki Takaya, Nam Phan and LC Davis.

Omigawa spoke with MMA Fighting back in late October, where he claimed mistreatment by DREAM and displayed interest in a fight with UFC featherweight champion Jose Aldo claiming that, "Jose Aldo is a well-rounded fighter, and an interesting opponent for me, but technique-wise I am better and I'd like to prove that."