The Cut List: Who Desperately Needs a Win at UFC 124? 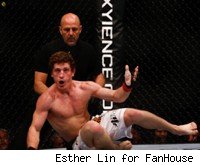 And yet, for several of the struggling fighters on the lineup for UFC 124 in Montreal this Saturday night, unemployment is suddenly a very real and very terrifying prospect.

So who's facing a win-or-get-fired situation this time around? For answers, analysis, and forecasts, let us consult the Cut List. For tips on dealing with your girlfriend's parents during the holiday season, the best we can do is suggest that you say as little as possible and smile a lot. Even if this makes them regard you as a happy idiot, it's probably better than the alternative.

Mac Danzig (19-8-1, 3-4 UFC)
Who he's facing: Joe Stevenson
Why he's in danger: Since winning TUF 6 Danzig has, to put it gently, underperformed. At the time he was arguably the most accomplished fighter to come out of the reality show (barring the "comeback" season), but that honeymoon is long since over. He got a raw deal in his last loss thanks to some inept refereeing, but it doesn't change the fact that his last impressive win was in 2008. If he can't beat Stevenson, the UFC might very well decide that Danzig is never going to live up to the promise he showed three years ago.
Odds of getting cut: Even. Stevenson is a pretty heavy favorite, and unless Danzig puts on a great show in the process, a loss will almost certainly land him in the unemployment line.

Dustin Hazelett (12-6, 5-4 UFC)
Who he's facing: Mark Bocek
Why he's in danger: His dual Submission of the Night wins were soundly erased by a brutal knockout loss to Paul Daley and then a vicious beating at the hands of Rick Story. What's worse, in the loss to Story it almost seemed as if Hazelett folded up early and waited for it to be over. Now he's dropping to lightweight, apparently hoping that the smaller guys won't be able to bully their way through his jiu-jitsu quite so easily. If it doesn't work, it's hard to see what value he adds to the UFC roster. And three losses in a row usually means only one thing...
Odds of getting cut: 3-1. Bocek is a very beatable opponent for Hazelett, since this is likely to turn into a grappling match almost immediately and stay that way. As long as he doesn't get outwrestled, he should win this and stay alive in the UFC. For now.

Dan Miller (12-4, 4-3 UFC)
Who he's facing: Joe Doerksen
Why he's in danger: I hate to say it, but Miller's well-publicized and utterly heartbreaking personal problems may have saved him from the dreaded three-in-row cut after his loss to Michael Bisping at UFC 114. The UFC just didn't want to appear to be that heartless, and with good reason. Now, unfortunately, it might be another story. Miller rebounded with a submission win over John Salter in Boston, but if he loses this one he'll be 1-4 in his last five fights. That's a bad place to be, no matter how much goodwill you've built up with fans and the media.
Odds of getting cut: 2-1. If he plays it smart, he should be able to grapple his way to a win over Doerksen, thus securing his job. If he tries too hard to put on a show, he's just asking for trouble.

Rafael Natal (12-3, 0-1 UFC)
Who he's facing: Jesse "Water" Bongfeldt
Why he's in danger: If you come into the UFC after beating a couple notable fighters in the minor leagues, as Natal did, you can probably afford to lose a decision in your first fight in the Octagon, which Natal also did. What you can't do, however, is lose your first two fights, especially if the second comes against a first-timer with a moniker like "Water" Bongfeldt. That would be too notable for all the wrong reasons, and you'd basically be asking for your walking papers. I mean, seriously. "Water" Bongfeldt. If he'd gone with "Beer" Bongfeldt, at least that would have showed some imagination.
Odds of getting cut: 3-1. Natal's the favorite here, and unlike Bongfeldt he won't have the Octagon jitters to contend with this time.

Pat "Awesomely Awesome" Audinwood (9-1-1, 0-1 UFC)
Who he's facing: John Makdessi
Why he's in danger: Again with these nicknames? Okay, I guess Audinwood's is so ridiculous that it's kind of fun, but he's in the same position as Natal. He lost his first UFC fight via submission at the hands of Thiago Tavares, and now he's facing a Canadian making his Octagon debut. That's not a fight you want to lose, unless you like the prospect of being awesomely out of work come Monday morning.
Odds of getting cut: 2-1. Audinwood is also a favorite against the undefeated but still untested Makdessi. Best to pounce on him early while the lights of the big show are still in his eyes.