No Return Date in Sight for Brock Lesnar; White Shoots Down WWE Rumors 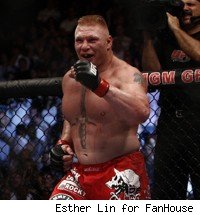 MONTREAL -- With UFC cards filling up into March of next year, one name has been notably absent from prospective matchups: that of the former UFC heavyweight champion Brock Lesnar.

According to UFC president Dana White, figuring out a course of action for Lesnar is one of his future priorities after getting this weekend's UFC 124 out of the way. And while he has no idea what's next for the major drawing card, it's something he plans of figuring out soon.

"Brock's in the woods somewhere," White said after a UFC 124 press conference. "I haven't talked to him. He gets back this week or next week. I actually talked to his [manager] as I pulled in here. We're going to talk on Monday and figure out what's next for Brock."

Lesnar, who lost the championship to Cain Velasquez at UFC 121 in October, had mentioned even before that fight that he planned to take some time off after grueling back-to-back camps in preparation for fights with Velasquez and Shane Carwin.

But White admits that Lesnar taking time off is not a major concern at this point due to some of the other issues currently circulating around the UFC's heavyweight division.

For a time, the rubber match of a trilogy with Frank Mir was planned, and it could still happen, but the chaos around the weight class is making it difficult to figure out exactly what will be next for Lesnar.

"We were going to to do the Frank Mir fight and that wasn't very popular," he said. "We'll see what happens. It could be Frank Mir. I don't know. We'll see what happens. There's a lot of things I have to work with, injuries. Shane [Carwin] is out right now. This [legal issue] is going on with Big Country [Roy Nelson]. There are a lot of different courses that are against you at times."

One place you won't see Lesnar? A WWE ring.

Though rumors have abounded that the former WWE wrestler would appear at the upcoming Wrestlemania in some capacity, White says that's not going to happen.

"He's under contract with me," he said. "I don't want to blur those lines. First of all, him coming over and making the choice to leave the WWE and come over here, we gave him that shot. It was a big risk on our part. The guy was 1-0 but he's done incredibly well. What the guy's been able to accomplish with no experience in such a short amount of time, I don't want him going to WWE and blurring the lines of what's real and what's not. I think it happens to us sometimes now."