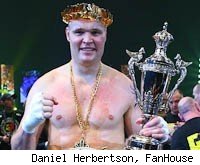 The 2010 K-1 World GP is the most important event of the year for the future of mixed martial arts in Japan. With FEG themselves admitting that they are financially strained, success with ticket sales, Fuji TV and sponsors are vital if K-1 and DREAM are to continue in 2011. Fortunately, to distract us from troubling business matters, we have eight of the best kickboxers in the planet fighting for our amusement.

Semmy Schilt will attempt to win his record-setting fifth K-1 World GP, Strikeforce heavyweight champion Alistair Overeem looks to be the first fighter to ever to hold a K-1 belt and major MMA belt at the same time, Peter Aerts makes one final attempt at his fourth GP and Gokhan Saki, Tyrone Spong, Kyotaro and Daniel Ghita attempt to usher in the new generation of kickboxing.

When: Dec. 11th. Live broadcast on HDNet at 2AM ET

Quarterfinals
Mighty Mo vs. Peter Aerts
He was a late replacement but Mighty Mo's qualification in Seoul was the least impressive among Saturday's Final 8. Mo's reputation as a power puncher is becoming somewhat generous as he has been adding few and fewer names to his hit list over the two years. Peter Aerts' will have no problem exploiting Mo's lack of options despite the American's promise to be in shape and prepared. Forget the Aerts that lost to Kyotaro earlier this year; the three-time champion admits that he made a mistake by going down a division this late in his career. Aerts is not a fast fighter but he has the immaculate timing that comes from two decades at the highest level in the ring and that timing is what got Aerts past Ewerton Teixeira and also what will also get him past Mo.
Pick: Aerts by Decision

Semmy Schilt vs. Kyotaro
Kyotaro continues to exceed my expectations. It started with his 2009 Heavyweight GP win where I expected both Melvin Manhoef and Gokhan Saki to knock him out without too much trouble. His first title defense against Peter Aerts seemed to me like it would be the end of his run. Jerome Le Banner is in his twilight years but again, I was sure Kyotaro would falter. Despite my terrible history of predicting Kyotaro bouts, against Schilt he won't be able to find a home for his right hand and prove me wrong yet again. Schilt's power, chin and superb use of his height and reach make him the fighter to beat in this tournament. Kyotaro should be impressive in defeat if he uses his speed but he will finished with punches late in the fight. The Schilt that looked all too human against Hesdy Gerges will not be in the ring here.
Pick: Schilt by KO

Daniel Ghita vs. Gokhan Saki
The most difficult fight to predict in the quarterfinals is clouded further by a leg injury that Ghita carries into this bout. The advantage that Saki holds in this fight is his excellent combination work and speed, and if Ghita's injury is severe, that advantage will be compounded and Saki will run circles around him. Ghita needs heavy, well-placed leg kicks to slow down a fast foe and if he has any injury going into a K-1 Finals he is doomed. Before Ghita confirmed the injury at the pre-fight interviews on Thursday, I had him as a dark horse for the tournament. Gokhan Saki now takes that title.
Pick: Saki by KO

Alistair Overeem vs. Tyrone Spong
Spong's K-1 record does not reflect how good he is. His domination at lighter weights is something that most fans have never seen but he is the most technically gifted fighter in the tournament. Spong's size has been an issue in K-1 though and despite his efforts to put on weight, against Overeem (who is currently at 265 lbs) the size disparity will more than ever be painfully apparent. Overeem's performance in Seoul at the Final 16, was for me, the most impressive of his career. Under heavy assault Overeem remained cool, watched every incoming punch and as soon as an opening presented itself he launched out of his turtle shell and scored a knockdown. It wasn't the brute force of an "Ubereem", it was a sniper's shot. We knew Overeem was powerful but we didn't know that he was that precise and technical. Spong wil be difficult to snipe though and Overeem will most likely get the KO via brute force as he smashes a hook through in the first round.
Pick: Overeem by KO

Semifinals
Peter Aerts vs. Semmy Schilt
Aerts and Schilt have met three times in their K-1 careers: Aerts with a pair of tough fought decisions outside of tournaments and Schilt with a KO in the finals of the 2007 World GP. Both fighters should be fresh for their fourth meeting and this time I see Schilt squaring up the score. Aerts has spoken about how difficult tournaments are on his body at this age while Schilt is the perfect tournament fighter and will exploit any weakness that Aerts is now carrying in a body that has been fighting in K-1 since 1993. It might take Schilt a round or two to find the opening but the stoppage should come and and Schilt will get his shot at his fifth title.
Pick: Schilt by KO

Gokhan Saki vs. Alistair Overeem
Gokhan Saki strikes me as the most mentally prepared and confident fighter in the tournament, and if he is to succeed against Alistair Overeem, then his mind will be his most important asset. Saki's aggressive, sometimes wild style leads to him getting hit and against Overeem he cannot risk that. Saki will need immense concentration for three rounds and will need to avoid every instinct he has as a fighter if he is to get past Overeem but I cannot see that happening. Saki may start out strong but his confidence and natural aggression will lead to a lapse in focus and that's when the knockout will come.
Pick: Overeem by KO

Final
Semmy Schilt vs. Alistair Overeem
Both Schilt and Overeem will have conquered smaller opponents on their way to the 2010 K-1 World GP Finals and here in the finals Schilt will again have the advantage as he should come in at least 26 pounds heavier than the 265 lbs Strikeforce heavyweight champion. The real key to this fight is not size though, it's stamina.

Overeem's build is not that of a tournament fighter, he has had trouble in the past (although admittedly, not as a heavyweight) with gassing and he has the toughest side of the draw. With every round that Overeem fights, his chances of knocking out Schilt decrease. Schilt's jabs and knees to the body will suck the stamina out of Overeem, leading to his demise late in the fight. Schilt is the best tournament fighter in the sport and he will shine again here as he takes home his record-setting fifth K-1 crown.
Pick: Schilt by KO