Daniel Cormier on Koscheck-GSP: 'In Reality, Josh Is the Better Wrestler' 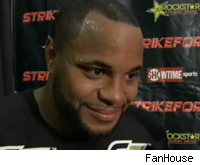 MONTREAL -- Like millions of others, Daniel Cormier has watched in awe at the excellence of UFC welterweight champion Georges St. Pierre. Unlike the masses, however, Cormier has earned the right to either critique or praise perhaps the most lauded part of GSP's game, his wrestling.

While Cormier is known to some fans as a rising Strikeforce heavyweight, he's also a two-time US Olympian in freestyle wrestling.

Count him among the people that are stunned by St. Pierre's rapid wrestling progression despite no background in the discipline, but he parts ways with the group at the suggestion that GSP is a better wrestler than his UFC 124 opponent, Josh Koscheck.

"In reality, Josh is the better wrestler. That's just a fact," said Cormier, who is a teammate of Koscheck's at American Kickboxing Academy. "People talk about Georges taking Josh down. What if Josh takes Georges down? Josh is a better wrestler, so why wouldn't he be looking to use his advantage there? He's got to be looking to take him down at times, stand with him at times. He's got to mix it up, and he's a better wrestler, so that's an advantage for Josh. Josh is prepared to go everywhere. Like going back to Cain Velasquez's fight [against Brock Lesnar], he was ready to fight everywhere. Josh is ready for the same thing."

The first time Koscheck and St. Pierre fought, back in August 2007, Koscheck took for granted that he could stop GSP's takedowns, but St. Pierre landed both of his takedown attempts en route to a unanimous decision win.

Koscheck says today that the development served as a wakeup call for him, and Cormier saw the effects of the memory on the welterweight title challenger in the weeks leading up to UFC 124.

In preparation, Koscheck brought in two-time NCAA champion Chris Pendleton to mimic St. Pierre as he redoubled his focus on wrestling.

"He took it very seriously this time around," Cormier said. "Last time, he had an attitude about not being able to be taken down by the guy, but it was an attitude that wasn't deserved because he didn't train it. But now, he can say 'This guy can't take me down,' because he's earned the right to have that attitude by focusing on every aspect of the game. His wrestling's on par, his striking's on par.

"He's done it this time," he continued. "He's focused, he's nursed it, he's gotten back to what's important. That's his wrestling and standup, and now he can have the attitude of 'This guy's not going to take me down,' because he's as prepared as he can be. He's prepared to have that attitude."

Cormier says that the AKA team put in time watching film of St. Pierre and learning his tendencies, and Koscheck should have a much better idea of what's to come this time around. And despite picking his teammate to win, Cormier wasn't shy about praising St. Pierre for his efforts in making wrestling such a vital part of his game.

"It's unbelievable. It really is unbelievable what he's accomplished with his background," said Cormier, who returns to the Strikeforce cage on Jan. 7 against Devin Cole. "He's been a karate guy his whole life and he's taking down guys that have been NCAA champions and wrestled at the highest level. I am really impressed with him and I think his timing is as good as anybody in mixed martial arts. And it's because of his dedication and commitment to getting better that made him one of the best wrestlers in mixed martial arts.

"That said, Josh worked harder than anybody I've ever seen in my life," he continued. "He knows what it takes and put in a camp to become a world champion."