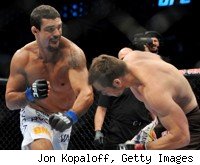 "UFC fans expect big things from us every year for our Super Bowl weekend show, and this year could be our biggest ever," UFC president Dana White said in the press release. "Anderson Silva vs. Vitor Belfort is a fight fan's dream match. It's a fight people have wanted for years. Don't blink because both of these guys have dynamite in their hands and can end the night quickly and in very exciting fashion."