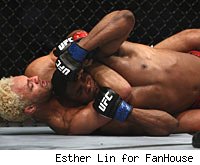 In one of the biggest mixed martial arts fights of the year, UFC welterweight champion Georges St. Pierre will defend his title in his hometown against Josh Koscheck at UFC 124. We've got the predictions right here.

When: Saturday, the non-televised undercard starts around 7 PM ET and the pay-per-view broadcast begins at 10.

Georges St. Pierre vs. Josh Koscheck
The first time these two fought, at UFC 74 in August of 2007, St. Pierre won a fairly one-sided unanimous decision in a non-title, three-round fight. Both St. Pierre and Koscheck have grown as fighters since then, but I don't see a lot of reasons to think it will be much different this time around, other than the fact that this time GSP is likely to handle Koscheck for 25 minutes, rather than 15.

Stefan Struve vs. Sean McCorkle
McCorkle is 10-0 in his MMA career and has finished nine of his 10 opponents, but he's never faced anyone even close to as good as Struve, who's only 22 years old and already has 20 professional victories, including four in the UFC. I don't think McCorkle gets out of the second round with Struve. (Fun fact: The 6-foot-7 McCorkle and 6-foot-11 Struve have the tallest combined height of any opponents in UFC history.)
Pick: Struve

Jim Miller vs. Charles Oliveira
The 14-0 Oliveira is one of the most promising prospects in the entire sport, and he has a great MMA career ahead of him. But I don't think he's ready for the likes of Miller, who is 18-2, with the losses coming only to UFC lightweight champion Frankie Edgar and No. 1 contender Gray Maynard. I like Miller to take Oliveira down in all three rounds and grind out a decision.
Pick: Miller

Joe Stevenson vs. Mac Danzig
Stevenson and Danzig are both former Ultimate Fighter winners who have lost more than they've won recently and are in desperate need of a victory. Stevenson, the more experienced and more well-rounded of the two, can probably do enough to earn a decision, although that's not a prediction I feel real confident about. I'll also predict that the loser of this fight will be told he needs to move down to featherweight if he wants to keep his job in the UFC.
Pick: Stevenson

Thiago Alves vs. John Howard
Alves is arguably the No. 3 welterweight in the world, but he hasn't won a fight in more than two years and has been dominated by Jon Fitch and Georges St. Pierre in his last two fights, so this is a must-win for him. Fortunately for Alves, Howard is a much easier opponent. Howard won't be able to take Alves down the way St. Pierre and Fitch did, and Alves' striking is a cut above Howard's. I expect Alves to win by TKO.
Pick: Alves