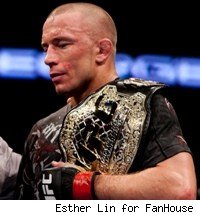 MONTREAL -- Canada may be known as the "Great White North" to many, but when UFC officials look at the vast North American country on a map, they only see green.

Upon the promotion's first trip to Canada in 2008, they promptly shattered the North American MMA attendance record, with 21,390 fans paying over $5 million to witness Georges St. Pierre recapturing the UFC welterweight title. That number was eventually topped at another Montreal show, and now it's expected to fall again at Saturday night's UFC 124 when St. Pierre takes on Josh Koscheck.

Neither the gate nor attendance records will last very long. UFC's director of Canadian operations Tom Wright says the company's Ontario debut at Toronto Rogers Centre next April will soon be the record-holder.

"As much as we're confident we're going to set some records here in Montreal in terms of turnstile gate and live gate, I think we'll beat those in Toronto on April 30," Wright told MMA Fighting.

If the prediction holds true, Canadian crowds will have re-raised the North American attendance records four times in three years. Columbus, Ohio is the last non-Canadian city to hold the mark, when 19,079 filled Nationwide Arena to watch Randy Couture slay the giant Tim Sylvia at UFC 68.

Just how many fans the UFC will draw Toronto is the multi-million dollar question. Wright said the April 30 event, which was announced on Tuesday, is still in its early staging as far as logistics goes, so it currently impossible to tell how many fans the Rogers Centre will be configured to hold.

While the massive stadium has held as many as nearly 70,000 attendees for an event (Wrestlemania 18 drew 67,237), UFC president Dana White has repeatedly said he would not compromise the "fan experience" just for the sake of bragging about a gigantic attendance figure.

"It's a question of being able to provide an opportunity for as many fans as possible to experience the first event in Ontario," Wright said. "There's a lot of pent-up demand and you only have one chance to make a first impression.

"We're not going to cram a bum into every seat and every nook and cranny in the joint," he continued. "But the truth of the matter is, we certainly think we can do well more than 20,000 and still be true to our roots. In Canada, we have a lot of great hockey arenas that are perfectly suited to our sport. But we've never been to a football stadium or baseball stadium, so this is new territory. It will take some time to figure out, and I can guarantee it will be a great show and a great card."

As to who might be on the card, it certainly wouldn't hurt to have Saturday's headliner in action. If St. Pierre comes out of his title fight relatively unscathed, he could theoretically be ready to go by the April 30 date, a prospect that would likely thrill the UFC.

"I'm the guy who runs UFC Canada, so you can imagine who I'd like to see win [on Saturday]," Wright said with a smile. "But the truth is, it's going to be a great fight on Saturday and the better fighter is going to come out with the belt. But any time you have the chance to have GSP on your card in Canada, I'd take that chance."

Asked about his interest in competing on the Toronto card, St. Pierre said he hasn't thought about it.

"I only have Josh Koscheck on my mind," he said.