Josh Koscheck Is Only No. 3 on GSP's 'Best Trash Talkers' List 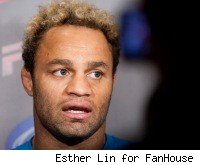 MONTREAL -- Josh Koscheck had six weeks to get under Georges St. Pierre's skin, six weeks to needle him, taunt him, bait him to react. St. Pierre rarely showed any hint that Koscheck's mind games were getting to him, even though it's fairly obvious now that he wants to finish his challenger in a decisive manner, partially as retribution for the constant verbal barrages that came his way during filming of The Ultimate Fighter.

Of course, Koscheck isn't the first guy to try to work his way into St. Pierre's head; he's only the latest. And the UFC welterweight champion says his UFC 124 challenger is not the best of the bunch when it comes to talking smack.

"The top trash talker, one of the best was Dan Hardy, because he was smart," St. Pierre said on Wednesday. "He's a very clever guy and he was very good trash-talking. Even if I was allowed to speak French in a trash-talk war with him, I would've never won. He's very good at it. I'd say BJ Penn was a good trash-talker, not because what he said was smart, but because he attacked me on a personal point, saying I take steroids and stuff like that, which is very bad to say that because now you go beyond the promotion of fighting to attacking the guy personally.

"And Koscheck? I would say he's not as clever as Dan Hardy, but not as bad as BJ Penn, either," St. Pierre continued. "I would put him third."

St. Pierre said he wasn't surprised that Koscheck tried to employ mental warfare against him, but has repeatedly stated that he tends to excel against fighters who get personal against him.

Worth noting: he beat both Hardy and Penn.

Yet it hasn't stopped Koscheck from firing off one-liners at St. Pierre, saying he "has quit in him," and questioning the champion's courage in a standup fight.

"It's always the same thing in every fight," St. Pierre said. "Some guys try to trash talk more than others. He's not the biggest trash talker I ever fought but he's pretty good. I have to give it to him, he's one of the best, one of the most arrogant guys. I'd say he's in the top three most arrogant guys I've fought and it's good, it makes me very motivated. But I'm always motivated. I love my job. I love what I do."