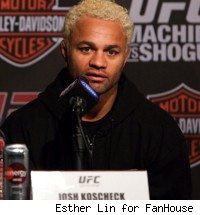 N Wednesday morning was a good example of the right way for a fighter to sell his upcoming fight to an audience that might be on the fence about watching it, as he promised in a SportsCenter interview to deliver the kind of exciting finish that casual fans are hoping to see when they decide whether to buy a pay-per-view.

"I believe that I'm going to win this fight," Koscheck said. "I'm going to knock Georges St. Pierre out, either in Round 2 or 3."

Koscheck has spent plenty of time talking to the MMA media in the lead-up to this fight, but those interviews aren't as important to the UFC's bottom line: If you're an MMA fan, you're going to buy UFC 124 whether you see a Koscheck interview or not. Much more important is the kind of interview like Koscheck had on SportsCenter, where he was talking to fans who don't regularly watch the UFC.

Although he came across as likable and engaging, Koscheck also embraced the villain role, as he so often has, noting that he looks forward to beating St. Pierre in front of the champion's hometown fans in Montreal.

"I think that there are going to be a lot of boos," Koscheck said. "The last time we were here in Montreal we got spit on, we got beer thrown on us, we got popcorn thrown on us, So I'm going to be prepared for all that and more. It's Georges' hometown. It's almost like Rocky going into Russia -- it's cold here, it's snowing here, and I guess we're going to disappoint a lot of people."

Rocky IV, of course, featured the implausible ending of the Russian fans chanting Rocky's name as he defeated Ivan Drago. Somehow I don't think the Montreal fans will cheer if Koscheck's prediction comes true, and he pulls off an upset of his own. But Koscheck is doing a good job of selling the fight not just to fans in Montreal, but across North America.