Sean McCorkle Says Struve Jokes Are Nothing Personal, Just a Way to Get Paid 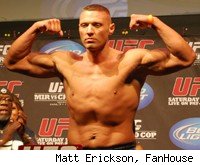 First things first: Sean McCorkle did not talk his way into the UFC. He's heard that version of events floating around the internet and he'd like to clear the air. As much as he'd like it to be the case that his over-the-top online persona got him a UFC contract, he knows it's more about his fighting ability than his sense of humor, no matter what other people might say.

"I think they mean it as an insult, but I think it's hilarious," said McCorkle. "You're telling me that I'm so talented at talking in interviews that it got me into the UFC? Really? I mean, [UFC matchmaker] Joe Silva told me when I first met him, 'I just want you to know that we love your internet stuff, but that's not the reason you're in the UFC.' I kind of said, 'Darn it, I was hoping that it was.'"

But as long as he's here anyway, he might as well have a little fun. That's why, ever since he accepted a fight with Dutch heavyweight Stefan Struve at UFC 124 in Montreal, McCorkle's personal Twitter has featured an almost constant barrage of stinging one-liners aimed directly at Struve.

"Stefan Struve couldn't make a Korean wife submit," reads one missive. "Sometimes I wonder if life as a 2nd tier UFC heavyweight is really all it's cracked up to be. That's when I call Stefan Struve and ask him," reads another.

For the 6-foot-7, McCorkle, who said his dream job would be writing for "Saturday Night Live," it's nothing personal. He doesn't particularly dislike Struve, and said he thinks Struve will end up liking him and feeling "conflicted" if he can find 10 minutes to talk to him before the bout. As strange as it might sound, he actually hopes Struve isn't taking any of this too personally. Even if he is though, McCorkle won't exactly lose any sleep over it.

"People ask if I'm afraid to give him some extra motivation, but I think he should have been motivated when he got in the UFC. I don't need anyone to motivate me. I'm a self-motivated person. I work as hard as I can in every training session for as long as I can do it. I don't worry about giving the other guy incentive. The money's incentive enough for me. If he wasn't fired up beforehand, I don't know how he's going to get too fired up about anything I say."

For the 34-year-old McCorkle, the paycheck isn't just part of the goal – it's the one and only goal. The jokes and the insults play right into that part of the plan, he said, because even if it makes people hate him it ensures that they'll eagerly pay to see him fight. But in the end his goal in the fight game is not to craft some sort of legacy, but rather to make as much money as he can before the ride is over.

"You could be working at Best Buy," said McCorkle. "That's the way I think of it. Whenever I'm doing conditioning or something and it gets really tough, I just think that I could be working at Best Buy instead, wearing a little blue shirt and helping someone with their computer. Well, if you want to go do that you can. Or you can work out really hard two hours a day and then go do what you want the rest of the day."

The guys who say they'd do it for free? They're either lying or mentally unbalanced, said McCorkle. It's the same with the guys who say that if you're not in this sport to become a champion, you're in it for the wrong reasons.

"I'm the only honest guy out there," he said. "Maybe I just have a skewed view of it. When you're younger, like Struve is, you're more idealistic. Then you get beat down by life and you realize how terrible almost everything is and you think, I might as well try and have a little bit of money because if I'm going to be miserable anyway, it's better to be miserable and rich."

That's why he's glad to finally be in the UFC and off the small-time local shows, said McCorkle. He doesn't enjoy hurting people anymore than he enjoys being hurt himself, so if he's going to endure both for money, he might as well make sure the money is good.

Plus, after a frightening incident in smaller show, he came to realization about the dangers inherent in fighting opponents who weren't up to his skill level, he said.

"I fought at King of the Cage in 2007 or 2006, and I hit a guy so hard that he went out and he stopped breathing. They came in there and were pumping on his chest, and I was nauseous. I thought, if I just killed that guy I'm going to hang myself. Everybody afterwards was like, 'Man, that was awesome.' And I was like, 'Yeah? Was it awesome that his family was there watching that?'"

After that episode, McCorkle said, he almost gave up on MMA for good. Almost.

"I didn't want to fight anymore. I was sick to my stomach. I swore from that point that I wouldn't fight guys who weren't good anymore. Then I went out and fought like three more guys who sucked, so I guess I didn't stick to my morals on that one."

Fortunately, facing low-caliber competition is one problem he won't have in the UFC. Being locked in the cage with the 6'11" Struve on Saturday night, who has no doubt heard all of McCorkle's hilarious zingers by now, that's another matter.

As long as the check clears, McCorkle said, it's fine by him.

"I'm not a violent person by nature, only if you pay me a lot of money. So I guess the answer is, yes, I will kill someone for you for the right amount of money. But I will be sad for one night. At least until the next time I do it."