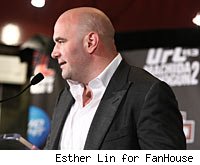 In a show that is likely to shatter UFC attendance and gate records, the company will host UFC 131 at the Rogers Centre in Toronto on April 30, 2011, UFC president Dana White announced at a Tuesday fan and media event.

White said that he expects the show to be "massive."

After previously voicing an opposition to the sport, Ontario suddenly surprised the combat sports community in August 2010 by announced it would permit MMA.

White quickly promised that Toronto would get a major show in 2011, and now it appears it's likely to be the biggest show ever produced by the promotion.

The Rogers Centre -- formerly known as the SkyDome -- holds upwards of 50,000 fans for baseball games, and has held more than 68,000 for professional wrestling's annual Wrestlemania event, back in 2002. White is on record as saying he wouldn't be after an attendance record, and would configure the massive complex to hold enough fans that they would not be compromised of the "UFC experience."

The UFC is also planning to hold a Fan Expo on April 29 and 30 in conjunction with the event.