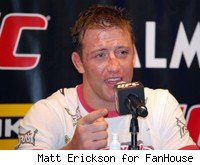 But even though past comments are no guarantee for what he'll say in the future, it's safe to assume the UFC president would have been asked about Steve Mazzagatti, the referee he's made a habit of being critical of more than any other official.

Mazzagatti officiated the co-main event between Stephan Bonnar and Igor Pokrajac at The Pearl at The Palms in Las Vegas. He took a point away from each fighter for illegal strikes to the back of the head. And despite having plenty of outspoken critics, televised replays show that Mazzagatti ultimately made the right calls. But neither instance was void of at least some mild controversy.

About halfway through the second round, with Bonnar in side mount looking for a mounted crucifix, Pokrajac threw a pair of knees that hit Bonnar in the back of the head. One of them opened up a cut on Bonnar's head, and Mazzagatti warned Pokrajac since Bonnar was on the ground, making the knees illegal.

At tne end of the round, Bonnar looked at Mazzagatti and pointed to the cut on his head. Soon after, Mazzagatti made the rounds to the three cageside judges, telling them he had taken one point away from Pokrajac for the knees – even though no further illegal strikes came after his warning.

Bonnar said Saturday he did some talking in the cage with Mazzagatti.

"I had to tell him," Bonnar said. "He hit me with like three of four of them. Finally, I'm like, 'Steve, that's four!' I didn't even care, really, because I didn't want to lose my position. But then I felt myself bleeding, and then I said something. 'C'mon, Steve, I'm bleeding, 'cause those are illegal.' Then I made sure to tell him I'm all right, though, because I didn't want him to start standing us up – I had a good side mount on him. But it sucks when you've got to ref your own fight."

Once Bonnar saw Mazzagatti had taken a point away from Pokrajac in between rounds 2 and 3, he had a measure of satisfaction.

"I didn't realize it until during my break," Bonnar said. "I was catching my breath and I saw him go over to a judge and tell them one point. I was kind of glad – I mean, he deserved it. It wasn't like one accidental knee, there were four. It's kind of a blur in there, but I do remember another illegal upkick that landed while I had my knees down. Not to complain or anything."

Replays showed Pokrajac throwing a third-round upkick that grazed Bonnar's face, just an instant before Bonnar took his knee off the canvas.

But just seconds before the fight ended, Bonnar lost a point, as well after several punches that hit Pokrajac in the back of the head as the fight closed out. Mazzagatti had warned Bonnar earlier in the fight, but Bonnar immediately protested and told the official he was hitting his opponent in the body, which replays confirmed.

Afterward, Bonnar said he won't dwell on the point deduction.

"I had side control. I couldn't really see his face – I felt like I was hitting his face," Bonnar said. "It felt like he turned the back of his head toward my fist while I was punching. Ya know, no hard feelings to Steve – it's a tough job, reffing. My hat's off to him and I'll just kind of move forward."

The win was Bonnar's second straight, putting him back over the .500 hump in the UFC at 7-6. In February at UFC 110 in Sydney, Bonnar had his fight against Krzysztof Soszynski stopped in the third round and he lost a TKO from a cut. Replays show the cut was opened up due to an accidental headbutt. Though Bonnar appealed the loss hoping to have the decision reversed to a no contest, the blemish on his record remained. In July at UFC 116, he beat Soszynski by TKO in their rematch to break a three-fight losing streak.