Nam Phan: Loss on TUF Finale May Be 'Blessing in Disguise' 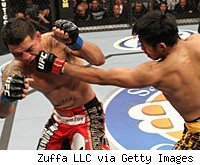 History will say Nam Phan lost his UFC debut on Saturday. But as far as Phan is concerned – and, as it turns out, maybe everyone save for a pair of judges – this one "L" on his resume is spelled with a bunch of silent W's.

Phan, a semifinalist on Season 12 of "The Ultimate Fighter, drew UFC and WEC veteran Leonard Garcia for Saturday's live TUF 12 Finale in Las Vegas. Phan seemed to dominate Garcia throughout their fight, which opened Saturday's main card on Spike TV. But it was Garcia who walked out of the cage with a split decision win.

The judges scored the fight 30-27 for Phan, but two 29-28s for Garcia, leaving Phan stunned, the crowd at The Pearl at The Palms stunned and without doubt the vast majority of the television audience stunned. Even Garcia admitted the judges got it wrong.

But a full day removed from the fight, Phan told Ariel Helwani on Monday on "The MMA Hour" that maybe what transpired isn't so bad, after all.

Had Phan merely won a decision over Garcia on Saturday, it would have been just that – a decision win. But on a night that included a Strikeforce card going head-to-head with the UFC – and three talked-about knockouts on that card – Phan emerged as the one fighter being talked about the most on Monday. All because of a loss.

Phan said White told him after the fight that he was going to get not just his show money, but the win bonus that would've been paid to him had the decision gone his way. He also was given a $30,000 Fight of the Night bonus.

Phan, who was one of the most experienced fighters in the TUF house for Season 12, including bouts in the WEC, Strikeforce, K-1 and Sengoku, said he has been on the losing end of close and controversial decisions before and didn't expect any special treatment.

"Dana white came by backstage and told me, 'You're getting your win bonus because you won that fight,' " Phan said. "I thought business is business, and I just thought if I lost, I lost, and I would only get my base pay. That's how it usually goes. But the UFC – Dana White takes care of the fighters. I really appreciate that."

Phan also said White told him his UFC future, at least in the short term, is secure, indicating he wouldn't be sent packing following the loss. And he said despite fighting at 155 pounds for the reality show, his plan is to remain at featherweight in the UFC.

After watching the fight again, Phan still holds to the instinct he had right after Garcia's hand was raised – that he won all three rounds.

"I thought I won all three rounds," Phan told Helwani. "There's no way he should've beat me anywhere. I was (trying to figure out and) I couldn't find it. I watched it from an unbiased standpoint. It was lopsided."

Phan said the only thing he could figure is that Garcia's style of fighting, which includes plenty of attempts at the home-run ball with big, looping punches, but not necessarily a high percentage of punches landed, looks favorable to some judges.

Garcia has five of his last six fights decided by split decision, including another controversial win over Chan Sung Jung at WEC 48 in April.

"I guess that's the only thing – it's very cosmetic, very superficial punches," Phan said. "I think it looked good, but he looked tired and sloppy. I guess the only way they could sway it to his advantage is if he was accurate. But it felt like he missed 90 percent of his punches. I feel like every time i threw, it landed."

Phan said before the final round, there was no talk from his corner about being in danger of losing a decision if the fight was put in the judges' hands.

"In the corner, we were just talking about pressure, pressure, pressure," Phan said. "More counters. Never did it come to our minds we were losing the fight. Even after the third round, the bell rang, Leonard Garcia looked down and goes, 'Crap!' He knew he lost the fight. And I'm raising my hand like, 'I totally got this. I totally won this fight.' "

But despite the setback, Phan will look to make the most of it – even though it may still take a few more days to get over the sting of the loss.

"Internally, I'm thinking (at the time) this is such BS," Phan said. "How in the world was it a split decision? I've been in a situation where I think I got robbed before. I think I've matured a lot in this sport as an adult and as an athlete. I really keep my composure very well. More than anything, I was just more confused."

Phan said he plans to regroup after a little rest and is ready for whoever the UFC offers him next.

And the way everything turned out for him, a loss has meant a lot of wins.

"I don't feel too bad," Phan said. "The whole Asian community and the MMA community thought I won. I think Leonard and (Garcia coach) Greg Jackson think I won. In the end, I got my win bonus and Fight of the Night, and Dana White and the UFC thought I won.