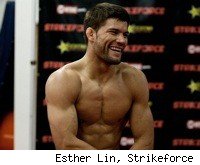 Fans won't get a chance to see Gilbert Melendez vs. Shinya Aoki at Dynamite!!, but there will be an important lightweight DREAM vs. Strikeforce fight on the card after all.

Josh Thomson vs. Tatsuya Kawajiri has been signed for the Dec. 31 event, MMA Fighting has learned from sources. The bout will take place at the Saitama Super Arena in Saitama, Japan.

Fighting and Entertainment Group, the parent company of DREAM, is expected to officially announce the fight in the coming days.

Thomson, 18-3 (1 no contest), has won two in a row since losing the Strikeforce 155-pound title to Melendez last December. He most recently defeated "JZ" Cavalcante in October.

The fight will mark just the second time in Thomson's 10-year career that he will be competing in Japan. He defeated Daisuke Sugie via submission at PRIDE Bushido 8.

In November, Thomson told the Las Vegas Sun that he wanted to fight Kawajiri.

"That's a fight I might kick back and wait for. I've wanted that fight forever. He's somebody that excites me."

Bibiano Fernandes is scheduled to defend his DREAM featherweight title against Hiroyuki Takaya on the card, along with a whole host of other uannounced fights.