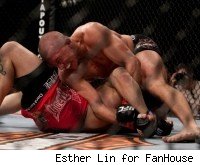 As fight time nears, Georges St. Pierre usually plays his cards closer and closer to the vest. The UFC welterweight champ has a few well-worn, go-to phrases that usually encapsulate his training camp to interrogators.

That doesn't make St. Pierre much different than any other fighter, but the consistency of his non-answers for questions relating to his preparation and strategy is often as reliable as a Swiss-made watch.

On a Monday conference call, however, St. Pierre let his guard down for a few moments, supplying reporters and fans with a peek into his preparation for his UFC 124 title defense against Josh Koscheck.

Of all the things St. Pierre (20-2) talked about during the course of the 45-minute call, the one thing he made sure to assert is his emphasis on finishing his brash challenger.

"I want to finish fights," St. Pierre said. "I've been very close my last fights. In my last fight, close to finishing two times. I made a little mistake. I want to make sure if I get the opportunity to finish I'm going to take it. I'm the kind of guy who doesn't make the same mistake twice."

"The way I was punching, a lot of stuff I was doing was wrong, and [Roach] corrected it," said St. Pierre, who beat Koscheck by decision in their first fight at UFC 74. "In the first fight with Josh, when I was striking, it was mostly to set up takedowns, but this time it will be also to knock him out.

"Roger Gracie came in and helped me a lot," he continued. "Roger finishes his opponent when he takes the guy's back. I've been working on that, so if I get the opportunity to finish, I will be able to finish him a lot better this time. I've been putting a lot of energy on punching power and the finish."

St. Pierre already has one of the most complete all-around games in the sport, fluidly transitioning between dynamic kickboxing, explosive wrestling and groundwork that equally balances the threats of striking and submission. Yet he has faced criticism from some corners after stopping only one of his last four opponents (BJ Penn at UFC 94). Jon Fitch, Thiago Alves and Dan Hardy have all made it through five rounds with St. Pierre, though all three men were soundly defeated. Fitch's face was badly battered in the loss, Alves was oustruck on the feet, and Hardy wiggled his way out of two deep submission attempts that might have had other fighters tapping.

In the moments after his fights, St. Pierre is known to delay his arrival to post-fight press conferences while undergoing an impromptu training session with a coach on some mistake he'd made during the course of action. And that's after winning. So it's no surprise that he'd re-tool any part of his game.

St. Pierre boasts that he had "the best guy in both worlds" training with Gracie and Roach in their respective disciplines, and the latter sounds like it resulted in a complete overhaul.

"A few months I've been working with him, and he changed a lot of stuff," St. Pierre said. "Before I knew him, I thought I knew boxing, but I found out I didn't. He corrected a lot of stuff for me and I feel much more confident, I'm very good."

Given the current criticism of trainer Greg Jackson, with whom he works, a St. Pierre finish could help change the notion that Jackson's fighters follow favor conservative gameplans (Of that, St. Pierre says, "In general, we're very entertaining.") With his statements, St. Pierre is certainly showing that he's willing to do what it takes. Of course, it can't hurt that the man standing across the cage has managed to get under his skin more than any opponent he's ever faced, and St. Pierre would likely enjoy his largest personal satisfaction by knocking out Koscheck or getting him to say, "I quit."