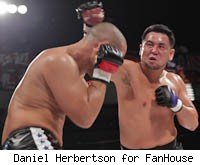 Pancrase's penultimate event of the year at Differ Ariake on Sunday featured three title fights in which all participants had met in the ring before.

Light heavyweight King of Pancrase Ryo Kawamura made a small step towards redeeming himself from his embarrassing knockout loss to Yuji Sakuragi in September as he managed to fight to a tense majority draw in the rematch for the belt.

Yuki Kondo was looking for redemption as he dropped a unanimous decision to Wajutsu Keishukai RJW's Rikuhei Fujii in Cage Force back in September, but it was spoiled as Fujii again outworked the 85-fight veteran on the feet and on the canvas to claim Kondo's crown.

In the fight of the night, current flyweight King of Pancrase Kiyotaka Shimizu and former champ Mitsuhisa Sunabe fought to an entertaining split draw in their rubber match. Sunabe pushed the action early and scored well with strikes while Shimizu came home strong to even the score and retain his crown.

With the memory of his first-round TKO to Yuji Sakuragi haunting him, Ryo Kawamura almost cost himself the belt this time around by doing nothing in the first round other than circling and pawing with his jab. Kawamura's tentative start left Sakuragi free to strike without fear of a counter and allowed him to show off his arsenal of kicks. Through the second and third rounds, Kawamura finally started to get his confidence and employ his jab, evening up the two of the score cards and although Sakuragi won one judges favor, the belt was returned to the champion.

One-time UFC light heavyweight title contender Yuki Kondo held his own through the first two rounds with Rikuhei Fujii and the experience of an 85-fight career dating back to 1996 gave the defending middleweight king the tools to deal with Fujii's reach advantage on the feet. Although Fujii was scoring better on the feet, Kondo's stayed in the pocket his taller opponent and negated the height difference as best he could.

The fight was up for grabs going into the final round and Fujii took the initiative right from the bell, taking the defending champion down, where Kondo spent all but the last 10 seconds of the fight on his back in half-guard, defending punches and Fujii's attempts at advancing to mount. This last round from the challenger was enough to win his second consecutive fight against Kondo and also claim the title of King of Pancrase.

Flyweight King of Pancrase Kiyotaka Shimizu retained his crown with after fighting to a split draw with the man he took the crown from, Mitsuhisa Sunabe.

Sunabe was getting the better of the defending champion as he was landing consistently with power punches on the feet and scored a knock down in the second round but Shimizu's relentless takedowns evened the score cards despite Sunabe's tendency to escape through the ropes. The defining moment of the fight came with just under a minute left when Sunabe took a finger in the eye prompting a lengthy doctor check. After some time, Sunabe declared himself fit to continue but was immediately swarmed on, giving Shimizu just the points he needed to get the draw and keep his belt.

There aren't many worse ways for the final fight of your career to go. Sengoku veteran Tomonari Kanomata took down the retiring Kenji Arai as the opening bell was still ringing, got Arai's back and choked him out 24 seconds into round one with no issues whatsoever. Arai, a mainstay of Pancrase since 2002 and one-time PRIDE participant retires with an even record of 15-15-5.

Masahiro Toryu picked up his second clean head kick knockout of the year with a devastating victory over Grabaka's Kei Yamamiya. Toryu had Yamimiya in the mindset to defend the takedowns as he had pushed for the clinch and double legs for the first four minutes of the bout but with nine seconds left in the opening round, Toryu threw a snapping high kick to Yamamiya's jaw that send him falling stiffly to the canvas.

The bout between 2000 Greco-Roman Olympic silver medalist Katsuhiko Nagata and PANCRSEism's Koji Oishi was unfortunately marred by Oishi complaining of head clashes, low blows and the fight spilling out of the ring during takedowns. The awkward bout made it to the final bell though and neither Nagata's takedowns or Oishi's kicks were enough to win the favor of the judges and the bout was declared a split draw.

In the evening's sole women's bout, Akiko "Betiko" Naito narrowly avoided a first round stoppage after her technical striking was overwhelmed by Tomomi "Windy" Sunaba's power but the Wajutsu Keishukai RJW fighter rallied with takedowns and ground control in the second and final round to make it to the final bell. Her second round performance was not rewarded though as judges awarded "Windy" the majority decision. "Windy" had a five-fight winless streak in 2008-09 but has managed to put together four consecutive victories in 2010.

Seiki Ryo got his first win in over nine years with a 28-second TKO over Daisuke Watanabe. Ryo started his career 7-0 but early meetings with Nate Marquardt, Kazuo Misaki and Hidehiko Hasegawa saw him add eight losses and three draws to his name.