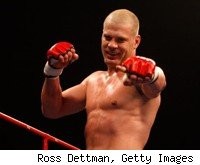 This is the Strikeforce live blog for Benji Radach vs. Ovince St. Preux, a light heavyweight bout on tonight's Strikeforce on Showtime card from the Scottrade Center in St. Louis, Mo.

Radach, who returns to Strikeforce after a year and a half away from competition, is coming off a loss to Scott Smith in April 2009. St. Preux last month defeated up-and-comer Antwain Britt via unanimous decision at Strikeforce Challengers 12.

Mike England is the referee.

Round 1: Radach, who belongs in the middleweight division, is giving up a six-inch advantage. Radach tries to punch his way inside and shoots for a takedown. Radach puts St. Preux on his butt, but St. Preux stands back up with the help of the cage. Radach continues to clinch with St. Preux in an effort to take the floor to the ground. St. Preux knees his way out. Radach catches St. Preux with a wide right hand but Radach is the one who backs off. St. Preux throws a high kick that looks like it stuns Radach. With Radach flattened on his back, St. Preux mounts him to rain down punches with more than two minutes left in the round. Radach isn't doing anything to escape and St. Preux continues to take his time and pound away at Radach. St. Preux digs his left arm underneath Radach's next but is unable to secure the rear-naked choke. St. Preux with body shots to set up another rear-naked choke attempt. Radach still not doing anything to escape. Still, the bell sounds and Radach will advance to the second. 10-8 St. Preux.

Round 2: St. Preux quickly Radach with the first punch -- a nice uppercut and Radach drops to his knees and turtles. Radach tries to stand but St. Preux presses forward to control Radach's back. Radach isn't doing much here either and St. Preux has slowed as well. St. Preux does land punches to the body to score points, though. Radach sits against the cage with 90 seconds left and the fighters hear the boos. St. Preux goes back to work with control of Radach's back and continues to punch away. Radach finally sprawls with less than 30 seconds left but St. Preux reverses him to pepper more punches to close the round. 10-9 Preux. Very bad showing here for Radach, who obviously could have used a tune-up fight coming off an injury and an extended absence from the cage.

Round 3: Radach charges in with punches. St. Preux weathers the storm and lands a straight left that pops Radach back to his knees. St. Preux goes back to controlling Radach's back while scoring with punches. More boos from the crowd and with good reason. The referee stands them up with 2:55 left even though St. Preux had control of Radach's back. Radach throws right hands and drops for the takedown. The referee separates them again and they restart. Radach lands a right and digs for the takedown. Another break with 45 seconds left. Radach shoots for the double. and finally takes the exhausted St. Preux down with 18 seconds left. 10-9 St. Preux. There's little Radach can do with the little time remaining and St. Preux will win this one.